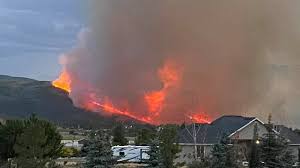 Crews continue to battle fires across the state, including the Parleys Fire, which forced the Mt. Aire area to evacuate and closed I-80 for an extended period of time Friday.

Investigators believe that fire was started by dragging chains on a dump truck. It was 15% contained Friday night and has burned an estimated 80 acres.

Crews are also battling the Upper Provo and Richard Mountain fires, which have burned 480 and 7,663 acres.