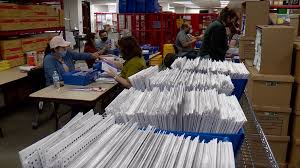 The ballots, which are both mail-in and provisional from in-person voting, could make or break some close races across the state with the bulk of uncounted votes coming from Davis, Weber, Salt Lake and Utah counties.

“Turnout was great and still climbing,” said Utah State Elections Director Justin Lee. “We already had more ballots come in than we saw in 2016 total and we know there are hundreds of thousands of ballots still to be counted.”

More than 1 million ballots had been processed prior to Election Day. County clerks and state officials pleaded with Utahns to turn in their ballots to avoid long lines during the COVID-19 pandemic. That advice was taken with people putting their mail-in ballots in drop boxes. They were able to be processed and the bulk of results able to be released on Election Night.

Turnout is estimated around 75%, Lee said, but could climb into the upper 80% range as more ballots come in and are verified. The original number of outstanding ballots was estimated at 375,000 but revised as many rural counties reported they had actually completed their entire counts, while others added in provisional ballots from same-day voter registration and in-person balloting.

There are still some legislative races and some ballot issues that are too close to call. The most high-profile of them is the 4th Congressional District race between incumbent-Democratic Rep. Ben McAdams and his Republican challenger, Burgess Owens. Roughly 2,600 votes separate the two, with McAdams in the lead.

The Utah County Clerk’s Office told FOX 13 it estimated about 17,000 ballots uncounted from that race. County-wide, Salt Lake County estimated 200,000 ballots in process (and some of those are in the 4th District).

Mayor Wilson said in an interview with FOX 13 she was back at work on Wednesday and planning for her first full-term.

“We have a lot of work to do for the next four years,” she said.

The mayor said she planned to work on issues dealing with growth and air quality. But most pressing was the COVID-19 pandemic.

“We’re going to see COVID lingering on, and some challenges,” she said. “The big, big lift will be the administration of a vaccine.”

Some constitutional amendments were also being called, with all of the proposed amendments passing. The most high-profile ones included Amendment C, which removes references to slavery in Utah’s constitution.

“I was watching this more than I was watching my own race!” said Rep. Sandra Hollins, D-Salt Lake City, who sponsored Amendment C. “When the results came in, I was very, very excited about it.”

Rep. Hollins said she was pleased to see the amendment pass with more than 80% of the vote. Supporters, which included Black community leaders, The Church of Jesus Christ of Latter-day Saints, the Catholic Diocese of Salt Lake City and the Utah State Legislature, argued it was overdue to remove such references to involuntary servitude and also was a statement against racism.

But returns as of Wednesday showed more than 190,000 Utahns had voted against it. Rep. Hollins said she was not concerned with those votes.

Voters also appeared to have approved Amendment G, which tweaked the income tax which is earmarked for education. In a deal brokered between the Utah State Legislature and some of the state’s biggest education groups, Amendment G would expand the income tax to include persons with disabilities. In exchange, the legislature agreed to an ongoing funding mechanism for student growth.

House Majority Whip Mike Schultz, R-Hooper, was pleased to see voters sign off on it.

“I do believe it’ll take a few years, but we’ll see over time more money going to education,” he told FOX 13.