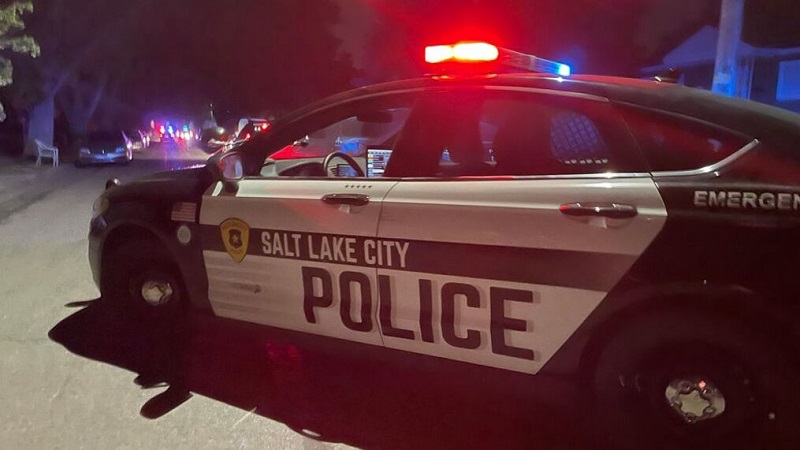 T the bust was a joint operation between Salt Lake City Police, Utah Highway Patrol, and the Utah State Bureau of Investigation, according to arresting documents.

Officers shut down the roadway in the area of 4800 West 1100 South, where “dozens of vehicles” vehicles were street racing, around 11:45 p.m. Friday.

Six of the suspects, Jose Manuel Garcia, 20, Gustavo Mendez, 20, Jonathan Laguna, 23, Thomas Madsen, 45, Erric Balderas, 22, and Cristopher Luna, 23, were all taken into custody after being positively identified and pulled over.

The remaining suspect, Jean Bernier, 29, attempted to flee the area, pulling out of a parking lot and hitting another vehicle. Bernier then drove around pedestrians and the police closure, nearly hitting officers who were outside of their vehicles. One UHP trooper positioned his vehicle to stop Bernier, who nearly hit the vehicle head-on, but then lost control and crashed into a concrete business sign that was off the road, disabling the vehicle in the process. Once he was in custody, Bernier admitted to having smoked marijuana earlier in the day. The probable cause statement also reported that he had smelled of alcohol. Officers also found marijuana in the car’s center console and an open container of alcohol. A field sobriety test was not given, due to the risk of Bernier fleeing on foot. Two passengers were in Bernier’s car and complained of injuries caused by the crash. Both were evaluated by first responders on the scene.

With bail being set at $500 each, the first six suspects were booked into Salt Lake County Jail for the crime of performing a Speed Contest or Exhibition on a Highway.

Bernier, meanwhile, was booked for the crimes of Reckless Driving, Driving Under the Influence of Drugs or Alcohol, Possession of a Controlled Substance, Drinking Alcohol in a Vehicle, Accident involving Property Damage, and Failure to Stop at Command of Police. Bail has been set at $5,000.