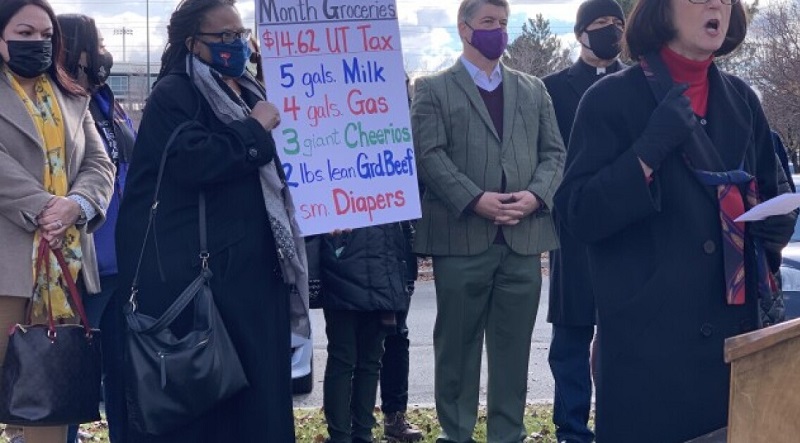 Utah – On Tuesday, Utah State Rep. Judy Weeks Rohner and activists have gathered at Utah State Capitol to urge legislators to pass H.B. 203, a bill that would remove what Rohner calls taxes that hurt the general community.

“We all know working Utahns are suffering from rapidly increasing food prices,” said Rep. Weeks Rohner. “I believe it is wrong for the state to be taxing the inflated cost of a gallon of milk, a dozen eggs, or a pound of bacon.”

Rohner was joined by numerous groups supporting eliminating the food sales tax and volunteers of the 2020 tax referendum.

“We can allow the legislature to consider revenue from all sources when developing budgets to fund programs—clean air, water conservation, Medicaid, the Great Salt Lake, and other pressing needs,” said Rohner. “We can do the morally right thing by eliminating the sales tax on food just as 36 other states have.”

There is currently another sponsored by Representative Rosemary Lesser, H.B.165, which is also aimed at eliminating Utah’s food tax. Both bills have been receiving bipartisan support.

“Eliminating the food tax benefits all families and stops lower-income families from being taxed nearly four times more of their income than the richest families,” officials say. “The U.S. Department of Agriculture found families in the lowest quartile spend 27% of their income for food, compared to 7% for families in the highest income quartile.”

“Food is something we all need. When people have this basic need they are better able to do the things that lead to more prosperous and fulfilling lives,” said Bob McEntee Utah Republican Party State Central Committee member and tax referendum organizer. ”Eliminating the food sales tax helps individuals and it helps us as a community.”