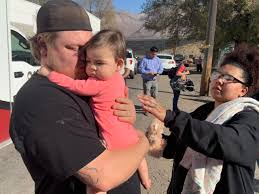 OGDEN, Utah — An AMBER Alert was issued Wednesday morning after a 10-month-old child was abducted during an auto theft in Ogden, according to police.

The Acura TL is described as gray in color and is bearing a “Ski Utah” license plate No. G565BU.

The 10-month-old child is identified as Amila Spratley-Apkewas. She was wearing a pink onsie with bunny ears. She has brown hair and brown eyes and is 2 feet tall.