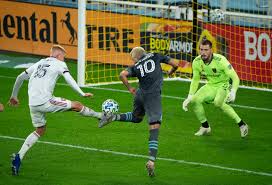 SALT LAKE CITY — Success can sometimes come in baby steps, and such was the case for Real Salt Lake on Sunday.

RSL of course wanted to take all three points on the road at Minnesota United, but considering its brutal track record in the Twin Cities, salvaging a 0-0 draw thanks to some spectacular saves from Andrew Putna was a great result for the club.

The tie was the first positive result ever in Minnesota for RSL, which was 0-4 on its previous four trips.

“The point’s massive, especially these days. Road games were tough before but now when you’re traveling the same day it’s even harder, so we’re definitely happy to pick up the point,” said RSL defender Justen Glad, who played at left back for the first time in his career.

Putna made seven saves, including several point-blank reactionary saves in the second half to deny Minnesota’s dynamic newcomer Emanuel Reynoso.

In the 50th minute he denied him with a chest save and then two minutes later with a kick save as Minnesota kept the pressure on during long stretches of the second half by consistently winning the second balls.

The pressure was certainly there, but the finishing was not as the visitors salvaged an important draw in picking up a point in the tightly-compact Western Conference standings.

“We wanted the win, we thought we could come in here and be a little more aggressive attacking wise. Third game in a week, you could see that a little bit, we were fatigued, we weren’t quite as sharp,” said RSL coach Freddy Juarez.

Three weeks ago in a game at Minnesota, Juarez used a make-shift lineup and that team was run off the field in the second half, falling 4-0.

He trotted out a much stronger lineup on Sunday, and though there was obvious fatigue the players still found a way to create some scoring chances of its own, with Douglas Martinez missing two great chances of his own.

With the draw RSL improved to 4-4-6 on the season, with its 18 points good enough for eighth place in the West.

Putna was certainly the hero of the match, keeping his team in the game on multiple occasions when it seemed Minnesota would score for sure.

“He was massive for us on a couple occasions tonight, so hats off to him. In road games like this you need your goalie to come up and make big saves sometimes and Putna did that for us tonight,” said Glad.

Putna wasn’t on the field three weeks ago when RSL lost at Minnesota 4-0. A lot went wrong in the second half in that game, but it wasn’t necessarily something the players were thinking about heading into Sunday’s match.

“I think the last game that we played here is one of those games as a team you just try to forget about. We played Minnesota two other times this year, so they’re no secret how they play. We just needed a different mentality,” said Putna.

The first was a prime volley opportunity from Martinez on a cross from Maikel Chang, but he skied the ball over the crossbar. Two minutes later the dangerous build-up started on a Justin Meram cross into the box, but ended with Martinez failing to get his hips turned quickly enough as his shot went into the outside netting.

For Real Salt Lake, it will now have a full week off before returning to action next Sunday at home against Los Angeles FC.

Real Salt Lake has never taken a point at Minnesota, and halting that trend will require a bit more risk taking