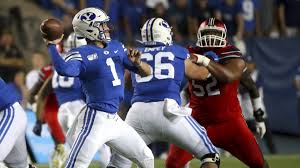 SALT LAKE CITY, Utah – The Utah Utes were originally scheduled to face their rival BYU at Rice-Eccles Stadium on Thursday, September 3. The Pac-12 moved to a conference-only schedule on July 31, which ultimately canceled the rivalry game. Then on August 11, they announced the postponement of all fall sports until at least January 1.

While it’s possible to play football at some point in the fall, the non-conference schedule is for sure canceled.

This was set up to be a prime opportunity for BYU to snap the nine-game losing streak to the Utes. BYU is filled with veterans while Utah was going to have a completely new defense with nine new starters expected to keep the program history of strong defense alive.

Also, Utah will have a new quarterback, running back and left tackle on offense.

Last season with a veteran squad, Utah went down to Provo and beat the Cougars, 30-12 to win their ninth straight game over BYU.

A lot of challenges would have faced the Utes heading into the rivalry game. Mainly on the defensive side of the ball in the secondary with an entire new crew in the defensive backfield.

BYU returns Zach Wilson who has shown some bright moments in the rivalry game but some low points as well.

The quick athleticism for the Utes’ new secondary could cause fits for Wilson and BYU’s passing game. The Cougars only have high school film to watch on most of the defensive backs and two players have a couple of games under their belts.

Getting a productive pass rush is crucial as well and Utah has plenty of guys up front that can accomplish that.

I projected Jake Bentley to get the starting nod in the season opener. Not to say that Cameron Rising isn’t a good quarterback. I think the SEC experience is a big plus for Bentley. Rising very well could work his way to the starting QB spot during the season.

One of the positives for Utah was their experienced wide receivers led by Bryan Thompson, Britain Covey, Solomon Enis, Samson Nacua and Jaylen Dixon. A big weapon in the passing game as well as the running game is tight end Brant Kuithe. I would like to think that these players would have big performances for the Utes and help them top the Cougars at home.

In each of the last two rivalry games, Zach Wilson has thrown a pick-six. Last season, Utah had two pick-sixes with Julian Blackmon and Francis Bernard taking the football to the house in Provo.

t’s become an expectation for Utah to get a defensive touchdown. Plenty of playmakers on defense can make this happen. Possibly Devin Lloyd? Mika Tafua? Or maybe a newcomer?