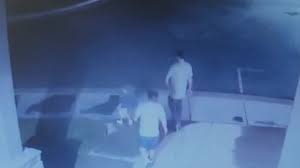 BLUFFDALE, Utah — Police circulated several videos and images Monday of individuals they said they wanted to question in connection with a recent spike in car burglaries.

Among those videos posted to Facebook were three that showed two men and a small child walking near Kanarra Creek Lane.

“Yeah, they’ve got a child with them!” said Sgt. Zach Robinson. “They’ve also been seen in the area attempting to get into cars, getting into cars—so we’re just trying to identify those two males.”

Robinson said the videos were captured at around the same time of several car burglaries in that neighborhood.

Police said they received at least 10 reports over the weekend of cars being burglarized in the city. Since Aug. 1, Robinson said there had been close to 40 reports in Bluffdale.

By comparison, he said an average month might see six or seven.

“I think they found there was some prime target over here because people aren’t taking stuff out of their cars and we’re getting hit because of it,” Robinson said.

Rachel Beaird said her roommate found out his car had been burglarized, and then she went outside to find shattered glass around her front passenger window.

“They took my paraglider, my paragliding harness, bunch of different paragliding gear, my climbing gear and my wallet,” Beaird said. “The wing alone I got for three grand. The harness was another grand. Yeah. It just adds up. The window is going to be another $100, $200.”

Beaird said somebody tried to use her debit card at a grocery store.

“I’m really mad I didn’t put my stuff in the garage,” Beaird said. “I honestly wish they would have taken the whole car and left the wing.”

Robinson urged people to “make it harder” for thieves by taking valuables inside at night, not keeping spare keys inside cars and also locking car doors.

“Generally those cars that don’t have stuff sitting in them and bags in plain view aren’t getting broken into,” Robinson said. “If you want to keep your property, take a couple extra steps and make sure it’s secure.”

Beaird’s friends set up a GoFundMe account* to help offset what was stolen.

She said she had never known the place where she lives to be anything other than a “really safe” neighborhood.

*KSL TV does not assure that the money deposited to the account will be applied for the benefit of the persons named as beneficiaries. If you are considering a deposit to the account, you should consult your own advisers and otherwise proceed at your own risk.

Jazz lose heartbreaking Game 7 and get eliminated by Denver, 80-78