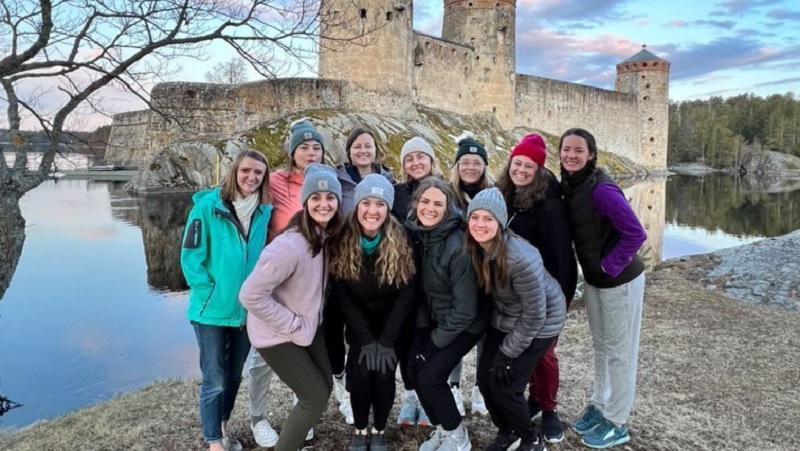 Provo, Utah — Many Utahns are continuing to do what they can to help Ukrainian refugees while we are now more than 100 days into Russia’s invasion on Ukraine.

More than a dozen undergraduate students in BYU’s College of Nursing and two of their professors concluded their study abroad program last month. After spending three weeks in Finland, they headed to Poland to give aid to Ukrainian refugees. “It was a really incredible experience,” said Symbria Lewis, a senior from Murray.

Before taking a train to Poland’s capitol city of Warsaw, the students and their professors spent time in Krakow. There they took part in helping out at a Ukrainian refugee center, that was housing more than 3,000 refugees. “I was assembling hygiene kits for most of the day and then I spent the afternoon in the kindergarten working for children,” said Lewis.

Dr. Julie Valentine, the Associate Dean of the College of Nursing, and Dr. Leslie Miles, a professor, went along with 13 students. “We sorted a massive mountain of baby and infant car seats, highchairs other things,” said Dr. Valentine.

When talking about the impact the war has had on the refugees, both Dr. Valentine and Dr. Miles got emotional. “We were really struck by how quiet it was, the children playing quietly and many people just sitting kind of staring on their cots, there’s just really an overwhelming sense of grief,” said Dr. Valentine.

According to Dr. Valentine, 25-percent of the population in Krakow right now, where they were for part of their week-long stay in Poland were Ukrainian refugees.

According to Dr. Miles, this is an ongoing crisis. “The reality is this is genocide, that’s going on and we as citizens of the world and just human beings should not, we can’t forget that.”

The experience also left an impact on the students, like Lewis. “They really are people just like us with families and children that they love and they, they’re losing them,” said Lewis.

Dr. Valentine and Dr. Miles say they are working with seven Ukrainian teachers they met in Poland to establish an organization to help other Ukrainian refugees, mainly women and children.

According to Dr. Valentine, after leaving a big piece of their heart in Poland, they are eager to go back at some point and continue to help those in need.