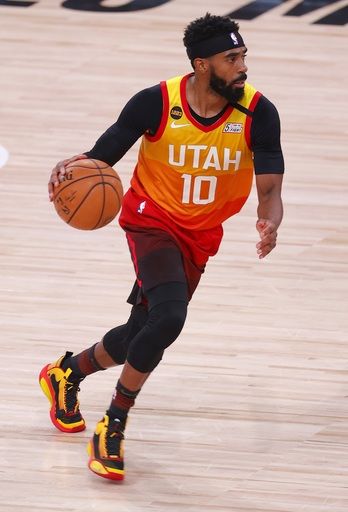 After being quarantined in his hotel, Conley could not be contained on the court.

Conley made a career playoff-high seven 3-pointers and scored 27 points in just 24 minutes, leading the Utah Jazz to a 124-87 rout over the Denver Nuggets 124-87 on Friday, as Utah takes a 2-1 lead in the first-round series.

”I’ve said it before and I’ll say it again: He’s a terrific player,” Jazz coach Quin Snyder said. ”I know how glad our guys were to see him back.”

Conley left the NBA bubble for the birth of his son and returned Monday night. He went through a four-day separation that ended Friday.

While in isolation, Conley said he got about 30 minutes of outside activity a day to work on his game.

There wasn’t a hint of rust as he made his series debut. He was 7 of 8 from 3-point range and had four assists.

“I always play for my kids, especially now with the third,” Conley said. “That just makes it that much more evident and that much more of a purpose. Really, it was just a joy to be out there with the guys. I know how much they supported me through this process and how much they wanted me back out there on the court. So I’m just happy I got to go out there and play with them.”

The 37-point win is the Jazz second biggest playoff blowout, only surpassed by Utah’s 39-point victory over Phoenix in 1991.

Rudy Gobert scored 20 of his career playoff-high 24 points in the first half, as the Jazz built a 25-point lead in the second quarter.

”They’re playing at a different level than us right now and we have to somehow find a way to not only match that but exceed that going into game No. 4,” Nuggets coach Michael Malone said.

Donovan Mitchell, who scored 87 points in the first two games of the series, was “held” to 20 points, but his offense wasn’t needed on a night in which the Jazz shot 51.2 percent from the field.

Utah led by 25 in the second quarter and extended it to 39 in the fourth with all of the starters on the bench.

It’s the second straight lopsided win for the Jazz in the series after dropping Game 1 in overtime. But the Jazz know a team as talented as Denver can get back in the series quickly.

”I know the series can shift in so many ways,” Conley said. ”We have to continue to keep fighting, continue to be consistent, play together and have fun while we do it.”

“I think this is the playoffs, and part of the playoffs is being able to get to the next game,” head coach Quin Snyder said. “There are games like this that occur throughout a series, and we have to be ready to play the next game. We have to maintain our focus and intensity. That will be the challenge, and I think our team is capable of doing that.”

Nikola Jokic led Denver with 15 points, while Jamal Murray had 12 points on 5 of 16 shooting.

”I just think we have a target on our back,” Murray said. ”Teams are prepared for us, and they’ve been giving us all they got. They did that tonight, and sometimes we think we’re good and we’re down 12 at the end of the first. I just think we’ve got to hold ourselves to a higher standard individually, as a squad, as a third seed.”

Georges Niang had 16 points, while Jordan Clarkson added 11 off the bench. Joe Ingles led the Jazz with eight assists.