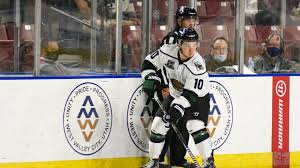 Diego Cuglietta of the Utah Grizzlies is the Inglasco ECHL Player of the Week for Dec. 11-13.

The 25-year-old had two assists in a 6-4 loss on Friday and notched the game-winning goal while adding another assist in a 3-1 win on Saturday.

A native of Kamloops, British Columbia, Cuglietta has recorded nine points (3g-6a) in 13 career ECHL games with Utah and Idaho while adding five points (2g-3a) in 26 career games with Texas of the American Hockey League.

The Grizzlies home opening weekend is December 18th and 19th as they host the Tulsa Oilers. Capacity is limited to 1,800 fans to start the season. Tickets are available at utahgrizzlies.com or by calling (801) 988-8000.