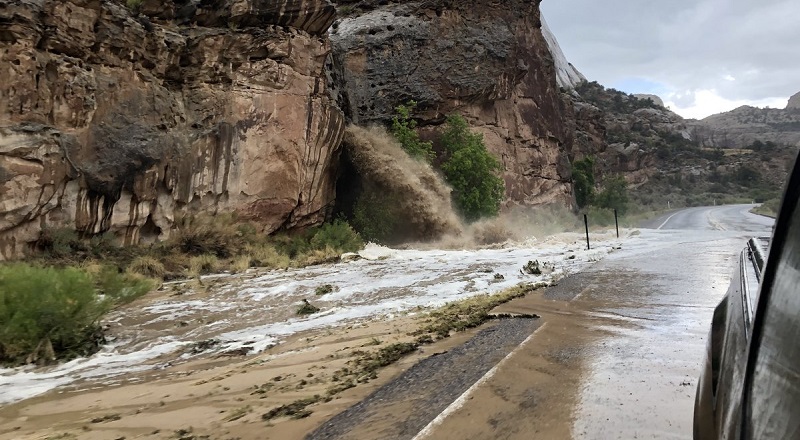 Other nearby areas were issued a Flood Watch, which is less severe than a Flash Flood Warning.

“Turn around, don’t drown when encountering flooded roads. Most flood deaths occur in vehicles,” the warnings read. “In hilly terrain, there are hundreds of low water crossings which are potentially dangerous in heavy rain. Do not attempt to cross flooded roads. Find an alternate route. Remain alert for flooding even in locations not receiving rain. Dry washes, streams, and rivers can become raging killer currents in a matter of minutes, even from distant rainfall.”

On the border of Garfield County and Wayne County, a warning is in place until 6:15 p.m. It includes areas in and near Capitol Reef National Park, including:

Just southeast of Bryce Canyon National Park in Garfield County and Kane County, a warning is in effect until 6 p.m. for the areas of:

Another warning in Garfield County goes until 5:15 p.m. and includes:

In Kane County, a warning is in effect until 7 p.m. from the head of Last Chance Creek through where it reaches Lake Powell at Croton Canyon.

Another warning in Kane County lasts until 9:15 p.m. It includes the Paria River from central Kane County down to the Utah-Arizona border.

The NWS expects the floodwaters to reach U.S. Highway 89 between 8-9 p.m.

The risk of damage from flash floods in these areas was “considerable,” the NWS said.

Some roads in Capitol Reef National Park were already closed due to flash flooding that occurred within the past week.