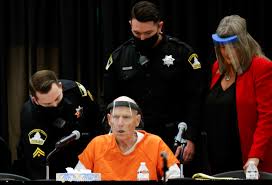 SACRAMENTO, Calif. — A former police officer who terrorized California as a serial burglar and rapist and went on to kill more than a dozen people while evading capture for decades pleaded guilty Monday to murders attributed to the Golden State Killer.

Joseph James DeAngelo Jr. had remained almost silent in court since his 2018 arrest until he repeatedly uttered the words “guilty” and “I admit” in a hushed and raspy voice as part of a plea agreement that will spare him the death penalty for a life sentence with no chance of parole.

DeAngelo, 74, did not cooperate with authorities. But he muttered a confession of sorts after his arrest that cryptically referred to an alter ego named “Jerry” that he said forced him to commit the wave of crimes that appeared to end abruptly in 1986.

“I did all that,” DeAngelo said to himself while alone in a police interrogation room after his arrest in April 2018, Sacramento County prosecutor Thien Ho said.

“I didn’t have the strength to push him out,” DeAngelo said. “He made me. He went with me. It was like in my head, I mean, he’s a part of me. I didn’t want to do those things. I pushed Jerry out and had a happy life. I did all those things. I destroyed all their lives. So now I’ve got to pay the price.”

While prosecutors suggested DeAngelo had been faking a split-personality, Ho said his day of reckoning had arrived.

“The scope of Joseph DeAngelo’s crimes is simply staggering,” Ho said. ”Each time he escaped, slipping away silently into the night.”

There’s no escaping now. DeAngelo, seated in a wheelchair on a makeshift stage in a university ballroom that could accommodate more than 150 observers at a safe distance during the coronavirus pandemic, pleaded guilty to 13 counts of murder and dozens of rapes that were too old to prosecute.

The large room at Sacramento State University was made to look like a state courtroom with the seal of the Sacramento County Superior Court behind the judge’s chair and U.S. and state flags on the riser that served as a sort of stage for a daylong proceeding that had a theater-like feel. Large screens flanked the stage so spectators could follow the livestreamed hearing.

DeAngelo, who wore orange jail scrubs and a plastic face shield to prevent possible spread of the virus, listed to one side and his mouth hung open as prosecutors read graphic details of the rapes and killings where he snacked on leftover turkey before leaving.

Family members wept as the proceeding went on most of the day. A pile of used tissues sat on the floor next to Jennifer Carole, whose father, attorney Lyman Smith, was slain in 1980 with his wife, Charlene Smith, who was raped before being killed.

DeAngelo, a Vietnam veteran and a grandfather, had never been on investigators’ radar until just before his arrest.

Investigators didn’t connect a series of assaults in central and Northern California to slayings in Southern California until about a decade after the last killing and eventually settled on the Golden State Killer nickname for the mysterious assailant.

Police used DNA from crime scenes to find a distant relative through a popular genealogy website database then built a family tree that eventually led them to him. They tailed DeAngelo and secretly collected DNA from his car door and a discarded tissue to get an arrest warrant.

The retired truck mechanic was arrested at his home in the Sacramento suburbs — the same area he terrorized in the mid-1970s, earning the title East Area Rapist.

Prosecutors detailed sadistic acts he committed after slipping into homes undetected and surprising couples in bed by shining a flashlight in their faces and threatening to kill everyone in the house — including young children — if they didn’t follow his orders.

The masked prowler initially said he only wanted their money to earn their cooperation. He would have women bind their husbands or boyfriends face down in bed with shoelaces, and then he would tie up the women. Victims described being prodded by the barrel of a gun or the point of a knife.

He piled dishes on the backs of men and said they would both be killed if he heard the plates crash while he raped the women.

At a home in Contra Costa County in the fall of 1978, he told a woman he would cut her baby boy’s ear off if she didn’t perform oral sex after he had raped her.

“I admit,” DeAngelo said after the prosecutor read the description of that crime.

He stole whatever he could find, sometimes a few bottles of Budweiser and some cash, other times diamond rings. He slipped off into the dark on foot or by bicycle and even evaded police who at times believed they came close to catching him.

He started on the police force in the San Joaquin Valley farm town of Exeter in 1973, where he committed his first killing.

DeAngelo was among the officers trying to find a serial burglar in the neighboring city of Visalia responsible for about 100 break-ins.

Community college professor Claude Snelling was killed by the suspected “Visalia Ransacker” after trying to prevent him from kidnapping his 16-year-old daughter.

After three years on the force, DeAngelo moved back to the Sacramento area, where he worked for the Auburn Police Department in the Sierra foothills until 1979 when he was caught shoplifting dog repellent and a hammer — two items that could be of use to a burglar.

DeAngelo killed a couple walking their dog in a Sacramento suburb in 1978, but the majority of murders came after he moved to Southern California.

Orange County District Attorney Todd Spitzer choked up as family members of the victims stood during his description of each of the four killings there. Spitzer, who wiped a tear at one point, diverged from other prosecutors to address DeAngelo directly when discussing the May 5, 1986, rape and slaying of Janelle Cruz, 18 — the final killing.

“You attacked her, you beat her and you raped her,” Spitzer said. “You murdered her in the first-degree, bludgeoning her in the face.”

A guilty plea and life sentence avoids lengthy and expensive litigation. Victims will be able to confront DeAngelo during a lengthy sentencing hearing beginning Aug. 17.

Victims began to stand in the audience as accounts of their attacks were read. Nearly two dozen were on their feet in solidarity as a prosecutor from Sacramento — where most of his sexual assaults took place — detailed each case. They cheered and laughed when Deputy District Attorney Amy Holliday noted victims consistently reported DeAngelo had a small penis.

One man, Victor Hayes, who was held at gunpoint while his girlfriend was raped in 1977 shouted out that he wanted his name read aloud.

“I’ve been waiting for 43 years. I’m not ashamed of what happened. I’ve never been John Doe in my life,” Hayes said later. “I want accountability and accountability starts with my name.”

Among the questions that remain is whether DeAngelo actually stopped his life of crime and, if so, why?

Ho cast doubt on DeAngelo’s statement in the interrogation room, saying he had “feigned feeble incoherence” to detectives despite appearing sharp while under surveillance the day before his arrest. Ho said DeAngelo had acted crazy when he was arrested for shoplifting three decades earlier in an attempt to avoid charges.

James Alan Fox, a criminologist at Northeastern University, said most serial killers do not have dual personalities or inner voices, though movies often portray them that way.

“It’s self-serving for someone to suggest that they did all of these things because of this voice: ‘Don’t blame me, blame the voice,’” Fox said.

This story has been corrected to reflect that DeAngelo hadn’t been on investigators’ radar until just before his arrest.