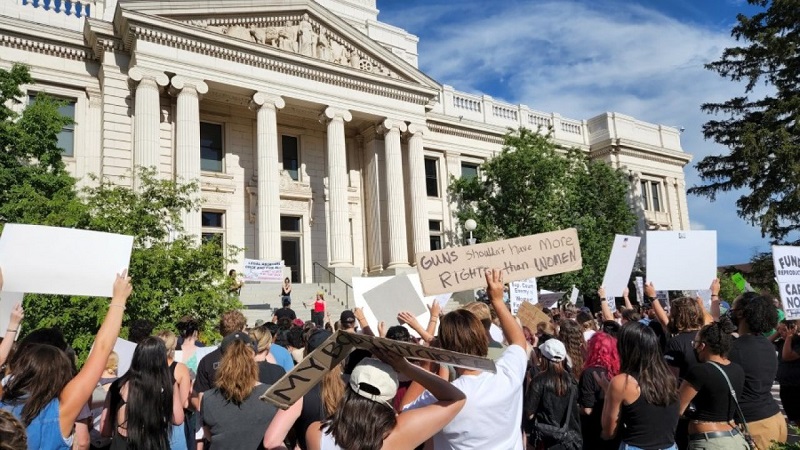 Potter is an organizer with the Provo chapter of the Party for Socialism and Liberation.

Since the leaked decision came out in early May, the group has organized several demonstrations.

“Protesting in the streets, to a large extent, that’s the thing that gets things passed,” Potter said. “That’s what passed the Civil Rights Act was the civil rights movement. Without it, the Kennedys weren’t interested in passing it.”

Leading the march down Center Street to the Utah County Historic Courthouse was Chloe Sokol, 19, who spoke openly about having an abortion recently.

According to Sokol, she started feeling ill and found out she was pregnant last month, despite being on birth control. “I cannot financially, mentally, or physically support a child right now,” she said, adding: “It’s not a fun experience. No one ever wants to be put in this position. I was very scared.”

Sokol would’ve gone to another state had the abortion decision happened a month earlier. “It would’ve been so much harder,” she said, “and the process would’ve been a lot more draining.”

An entrepreneur who sells honey, Curt Crosby, was across the street from the demonstration. He didn’t know about the protest but said he’s supportive of Utah’s abortion ban, calling it “long overdue.”

Hundreds of protesters marched in Provo for abortion rights. “You can’t kill people,” he said. “There’s a thing called the Ten Commandments, and it says ‘Thou shalt not kill.’ It doesn’t mean just kill old people or certain ages.”

Sokol worries about what may come next, like a rise in unsafe abortions. “I feel like it will cause a lot of women to be in a lot of pain,” she said.