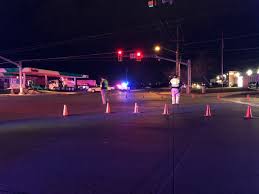 WEST VALLEY CITY, Utah  – Police have identified the driver who died after police said his car split in three when it crashed into a pole on Redwood Road Saturday night as 19-year-old Jesus Torres.

Calls came into dispatch that a car had been traveling at a high rate of speed when the driver lost control while switching lanes then crashed into a telephone pole, splitting the car into three directions. Other callers said there was possibly two people dead and others were calling to report a fight.

Wkckoff said when they arrived, no one was fighting and only one person had died. The man’s car split into pieces. One piece landed into the building, one piece into the parking lot of an apartment complex, and the engine had also become separated from the vehicle.

The driver was ejected and died at the scene, said Wyckoff.

Initially it was reported another car had been involved and possibly the two had been racing, however that individual has been cooperating with police and Wyckoff said it does not appear he was racing with the man and had indicated he was going the speed limit.

Wyckoff said they originally thought the man was in his 20s but they have not yet identifying him and therefor next of kin has not been notified.

Redwood Road is closed from Parkway Blvd to about 2600 south, it is not expected to be reopened for several hours.

Additionally the power is out to the entire area. Crews with Rocky Mountain Power have been on scene and have restored power to about half of the customers. The remaining 500 people are expected to have power back sometime Sunday morning.