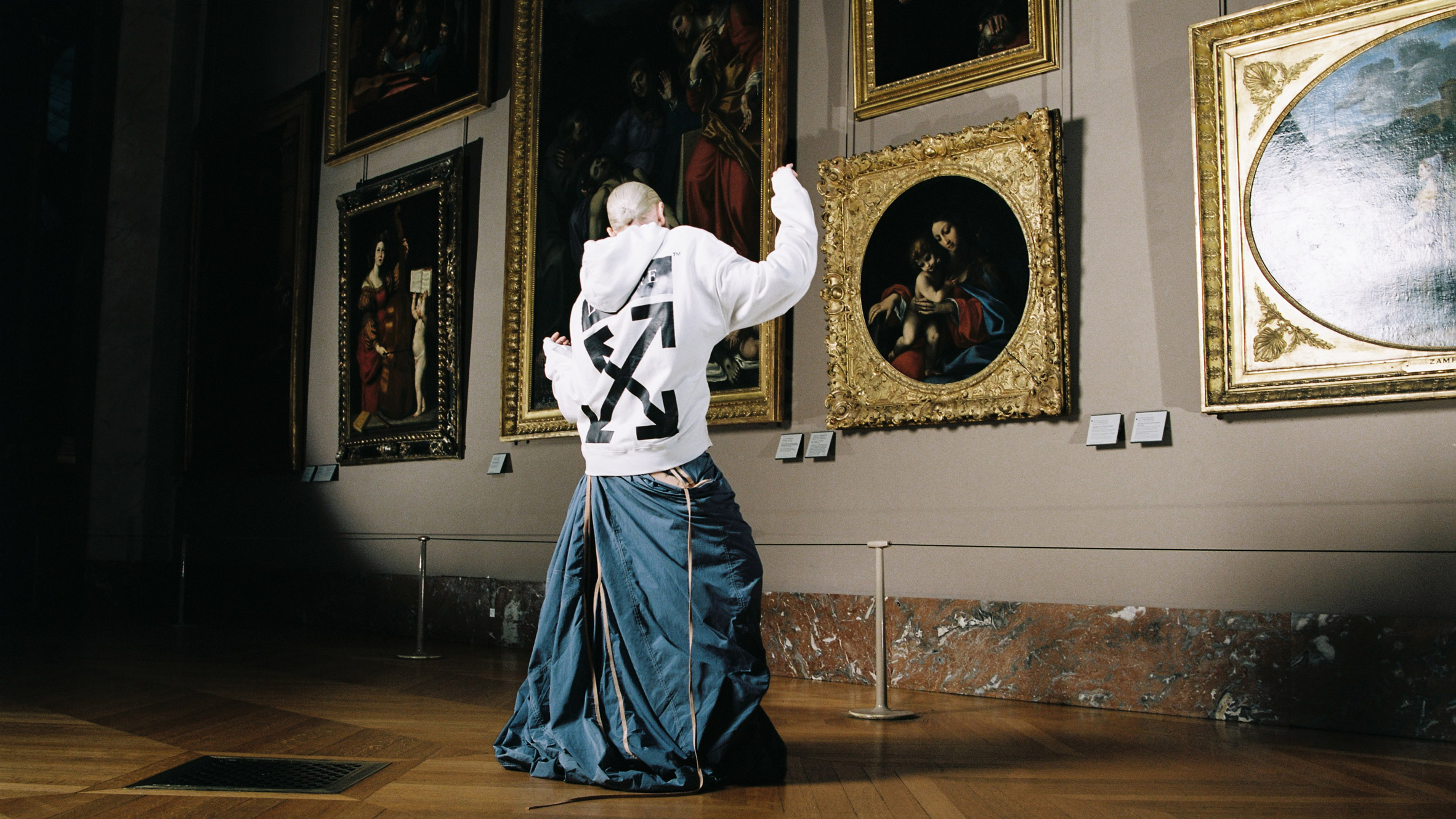 As the number of abandoned storefronts and closed retail outlets continues to mount, the once unremarkable activity of shopping at brick-and-mortar stores can feel like reality askew — like a stroll through the Twilight Zone. As this glum new normal becomes, well, the norm, signs of life can be almost as jarring.

Take, for instance, a pair of storefront windows on Beverly Boulevard in West Hollywood. Just recently they were lifeless reminders of an upscale furniture store, now defunct. Then, in August, they began to fill with seemingly unconnected objects: bluejeans piled in a chest-high mound, a lounge chair upholstered in denim, a mannequin in a jumpsuit with an eyeball for a head standing amid a sea of paint-splattered drop cloths.

Hand-painted signage in the other window offered only that this “Appointment Only” storefront with the cryptic displays, and the 6,000 square feet of retail space behind them, are the domain of Gallery Dept.

Despite the name, Gallery Dept. isn’t a gallery or a department store but a hybrid clothing label that sits somewhere in the Venn diagram overlap between street wear label, denim atelier, neighborhood tailor and vintage store. Just as accurately, you could call Gallery Dept. the personal art project of its founder Josué Thomas, a designer whose own creative urges are just as disparate and layered.

With so many small brands in a state of retreat this summer, Mr. Thomas’s label has not only weathered these spirit-crushing conditions but thrived. In less than two years, Gallery Dept. has moved from a crowded workshop a few blocks down Beverly Boulevard to its new space in part because its hoodies, logo tees, anoraks and flare-cut jeans — each designed and hand-painted by Mr. Thomas on upcycled or dead-stock garments — have become unlikely objets d’art in a crowded street wear market.

This corner of the fashion industry is a crowded one, and in recent years there have been a glut of collaborations and merch drops that have taken on a corporate cadence. In contrast, Gallery Dept. is something of a bespoke operation, offering street wear basics that are blessed with an artist’s (in this case Mr. Thomas’s) singular touch.

Mr. Thomas began to cut jeans and screen-print shirts as the mood struck in 2017, and since that time Gallery Dept. has grown from an underground cult label for collectors to one with atmospheric clout after being worn by Kendall Jenner, LeBron James, Kendrick Lamar and two of the three Migos (Offset and Quavo).

Those lucky enough to enter the appointment-only space, now booked with up to 20 appointments a day, are greeted inside by a 20-foot-tall span of wall that reads, “Art That Kills” in a large crawl text, and the occasional reference to Rod Serling’s seminal sci-fi program.

Throughout the sunlit store, Mr. Thomas’s abstract paintings and writings fill the spaces between clothing racks and bright brass shelves heavy with the brand’s thick hoodies and sweatpants. Over the chug of sewing machines, one can hear snippets of bossa nova Muzak, a vinyl-only mix also made by Mr. Thomas. (There are also plans to release music by other artists, including the New York rapper Roc Marciano, under an Art That Kills imprint.)

Gallery Dept.’s new space was financed on the strength of e-commerce sales from this past spring, and not with the help of venture capital or outside investors, Mr. Thomas said on a recent walk-through. This freedom gives him and the label, which now employs 12 people, the freedom to operate on its own esoteric terms. And there are a few. In the store’s dressing rooms, there are no mirrors to survey a fit. (“We’re going to tell you if a piece works or not,” he said.) Nor are there price tags on its garments.

“If the first thing you look at is the price, it’s going to alter your thinking about a piece,” he said. “I’d rather people engage with the clothing first.”

The Gallery Dept. does not indulge pull requests from stylists or send its pieces to influencers, a practice Mr. Thomas explains with a trace of punk indignation.

“Kendall doesn’t get a discount,” he said. “We don’t seed. I don’t care who it is — we don’t cater to different markets.”

Wearing cutoff carpenter pants and a white T-shirt, each dusted in a fine rainbow splatter, Mr. Thomas looked every bit like an artist roused from his creative flow, complete with paint-stained hands and individually colored fingernails. Standing in a mauve-carpeted room, Mr. Thomas pointed out his latest ideas: pewter jewelry in eccentric shapes, like an earring in the shape of a zipper pull, made in collaboration with the Chrome Hearts offshoot, Lone Ones, and shorts cut from dead-stock military laundry bags — while explaining the origins of his own style.
“I liked my parent’s clothing growing up,” Mr. Thomas said. “As a teenager, I was able to fit into my dad’s leather jacket. The beat-up patina on it was perfect, and I realized that that was personal style. It was something you couldn’t go to a store and buy.”

Mr. Thomas, who turned 36 in September, never studied fashion or garment making, and he can’t work a sewing machine. But growing up as the son of immigrants from Venezuela and Trinidad, he watched as his parents subsisted on their raw artistic skills to create a life in Los Angeles. And he now uses those same talents as an artist and designer: sign-painting, tie-dying, screen printing. For a short time, his father, Stefan Gilbert, even ran a private women’s wear label.

Similarly, in his early 20s, Mr. Thomas worked at Ralph Lauren. As one of the few Black people in creative roles in a predominantly white company, he soon realized that the only way to survive in the fashion industry would have to be with a project of his own making.

“I was the ‘cool’ Black guy, but there was nowhere for me to go,” he said. “Best case would have been sourcing buttons for women’s outerwear or something.”

Gallery Dept.’s spontaneous inception came about in 2016 when Mr. Thomas sold a hand-sewn denim poncho off his own back to Johnny Depp’s stylist. At the time Mr. Thomas was focused on making beats and D.J.-ing, but after selling all of the pieces he’d designed for a small trunk show at the Chateau Marmont, he realized he’d discovered a new creative lane.

It had less to do with ponchos, which were dropped from subsequent collections, and more to do with old garments being remixed in the heat of artistic paroxysm, with as little second-guessing as possible. With the help of Jesse Jones, a veteran tailor, Mr. Thomas began churning out made-to-order pieces for customers who often were unaware of what, exactly, they had stumbled into.

“We were creating pieces while we were selling them,” he said.

Working with heavy vintage shirts, hoodies, trucker hats, bomber jackets, whatever was at hand, Mr. Thomas would frequently screen-print the brand’s logo, adding paint or other flourishes as the feeling struck.

Today that extends to long-sleeve tees, sweatpants and socks. At the time, he also began blowing out the silhouette of vintage Levi’s 501s and Carhartt work pants into a subtle flare, accented with patches and reinforced stitching, resulting in a streetwise update of the classic boot-cut jean.

Mr. Thomas christened this style of jeans the “LA Flare.” And where denim has so historically hewed to “his” and “her” categories, the LA Flare is the zeitgeist-y “they” of street wear denim. (The label labels its items as “unisex.”)

The jeans come with a luxury item’s price tag, with a basic version starting at $395. Custom tailoring and additional touches by Mr. Thomas, can push the price upward of $1,200. One early collaboration with Chrome Hearts, a pair of orange-dyed flares patched with that brand’s iconic gothic crosses, has gone for $5,000 on Grailed.

“There is nothing like Josue’s repurposed jeans,” said George Archer, a senior buyer at Mr Porter. “They are both a wearable piece and a work of art. No one else is doing what he’s doing.”

For Mr. Archer, who first noticed the Gallery Dept. logo popping on men in Tokyo in March, Mr. Thomas “interprets and creates” clothing as if it was an end in itself — and not a commodity to be monetized. (Nonetheless, Mr Porter hopes to monetize a collection of Gallery Dept. pieces via its e-commerce site later this year.)

“You can feel the warmth of Josue’s hands on each of the pieces,” said Motofumi Kogi, the creative director of the Japanese label United Arrows & Sons. An elder statesmen of Tokyo’s street wear scene, Mr. Kogi found the label on a trip to Los Angeles last year. It’s not only Mr. Thomas’s artistic touch that stands out to him but his vision for remaking a staid garment into something that Mr. Kogi believes has not been seen before.

“He took this staple of hip-hop culture and refreshed it,” he said, referring to Carhartt pants.

Getting the people who make that culture to buy in was another matter. “The first year we did the flare, in 2017, skinny jeans were in,” Mr. Thomas said. “Rappers would come into the shop and say they’d never wear a flare. Now, everyone is wearing it.”

On Instagram, fit pics by rappers like Rich the Kid, along with the aforementioned Migos, Quavo and Offset, Gallery Dept.’s flare has become a familiar silhouette, skinny jeans breaking loose below the knee, usually coiled up at the ankle around a pair of vintage Air Jordans.

One fan of the jeans, Virgil Abloh, sees Mr. Thomas’s “edit” of the classic garment as the next chapter of its history.

“Their flare cut is the most important new cut of denim in the last decade — since the skinny jean,” Mr. Abloh said. A self-described Levi’s “obsessive” who owns more than 20 pairs of Gallery Dept. jeans, he walked into Mr. Thomas’s workshop one day after a routine stop at the Erewhon Market across the street.

“I thought: ‘This is amazing. Here’s some guys editing their own clothes in a shop,’” he said. “It reminded me of what I was doing when I started out, painting over logos, making hand-personalized clothes.”

Mr. Abloh considers Mr. Thomas’s work to be the fashion equivalent of “ready-made” art, and he offers Shayne Oliver of Hood by Air as a distant contemporary. He suggested that he and Mr. Thomas come from a lineage of Black designers that is still in the process of defining itself.

“He’s a perfect example of someone creating their own path from a community that hasn’t traditionally participated in fashion,” Mr. Abloh said. “I see Josue as making a new canon of his own, showcasing what Black design can do.”

Mr. Thomas didn’t argue with that. But he was also a little preoccupied with whatever was taking place at the tips of fingers to get lost in the thought. The future of his brand, after all, depends on his ability to stay in that moment.

“People want things that aren’t contrived,” he said, pulling at his own shirt to drive the point home. “This paint came from me working. I wanted to recreate this feeling. Once something is contrived, when you can see through it, it’s ruined. There’s only so much you want to explain.”

Do you like cheese? You can thank the Indus Valley Civilization for it