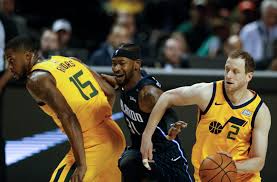 SALT LAKE CITY  – As difficult of an NBA season as it was, with the COVID-19 pandemic, injuries to key players, strained relationships between star players, the Jazz played well.

But blowing a 3-1 series lead to Denver and not getting out of the first round of the playoffs again hurts.

One of the frustrating things is we didn’t get a chance to see the Jazz at full strength in the playoffs.

“With Bojan [Bogdanovic] being hurt (wrist), and then Mike [Conley] missing the first two games, that’s just the way things happen,” Lindsey said. “No excuses, but I do think the one thing we were missing was Bojan’s ability to score from over the top of the defense.”

We did see Donovan Mitchell go from an all-star before the bubble, to a superstar in it.

“It all started when the league shut down,” said Jazz general manager Justin Zanik. “I think he spent a lot of time evaluating where he wanted to go and what he could do to help this team. He rose to the occasion, and I think that’s something that he expected of himself.”

Mitchell is expected to sign a max extension this off-season, and with Rudy Gobert eligible for a super max deal next year, the Jazz are going to have to open up the checkbook to keep both of their cornerstones.

“It’s really, really hard to get core franchise level talent in any market big or small,” Lindsey said. “But it’s exponentially hard to get that level of talent that has a high level of character.”

Jordan Clarkson is the biggest unrestricted free agent. He has expressed interest in coming back to the team. Lindsey said the Jazz want to improve their defense this off-season, but they don’t even know what the salary cap will be, when free agency, the draft or next season will take place.

“Once those dates are in place, we’ll get to work on specific things,” Zanik said. “But there are lots of different paths. There are a lot of different stuff that we can continue to prepare for here in terms of internal evaluation.”