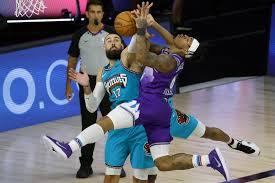 ORLANDO  – Just keep shooting. That’s what Jazz head coach Quin Snyder told his team after three straight sub-par performances in the NBA bubble, and the Jazz finally connected like they had been before the shutdown.

Joe Ingles scored 12 of his 25 points in the fourth quarter, and the Utah Jazz kept the Memphis Grizzlies winless in the NBA bubble with a 124-115 victory Wednesday.

Mike Conley had 23 points and seven assists against his former team for the Jazz (43-25), who improved to 2-2 in the seeding round and nudged ahead of Houston (42-25) for the fourth spot in the Western Conference standings.

“We just moved that ball, and when we rotate it from corner to corner, I know it’s hard to defend,” Conley said. “When we get into that kind of rhythm and mode, it’s pretty tough.”

The Jazz led the NBA in 3-point shooting at 38 percent before the shutdown. But in the first three games, Utah had made just 25 percent of its shots from beyond the arc.

“We’ve just got to keep shooting,” Snyder said. “Tonight some shots fell. For Joe, him making quick reads and understanding that he’s an excellent playmaker in the pick and roll. I know all of his teammates have confidence in him.”

“Coach just kept telling us that he’d only be worried if we stopped shooting,” Conley added. “Guys really got out there, especially JC and Joe, guys who might have missed a few early in a couple of these other games. They finally got a great rhythm going.”

Ingles had made just three 3-pointers in the Jazz first three games in the bubble. But on Wednesday, he made 6 of 11 from beyond the arc in his highest point total (25) since mid-January.

Rudy Gobert had 21 points and 16 rebounds for Utah, which took charge of a close game with a 9-0 run in the closing minutes. The Jazz held the Grizzlies scoreless for 2:56 while getting back-to-back 3-pointers from Ingles, who hit six 3s overall and finished two points shy of his career high.

“I was taking advantage of some opportunities and picking my spots,” Ingles said. “I don’t think we’re a team that takes bad shots. The more confidence we have in each other, the more we’ll keep doing that.”