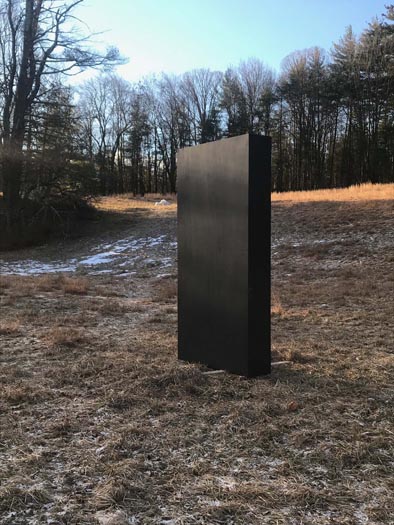 WOODSTOCK, N.Y. — In a scene reminiscent of the Stanley Kubrick classic film, “2001: A Space Odyssey,” a nine-foot-tall black monolith appeared over the weekend in a Zena cornfield.

It apparently arrived Christmas night and was gone by dusk Sunday.

“It was there. I have no idea where it came from. Could be aliens,” laughed Woodstock Town Supervisor Bill McKenna.

The appearance of monoliths have become the fad this month.

It started in November when a 9.8-foot tall monolith was discovered in a red sandstone slot canyon in Utah. With the aid of satellite images, it was determined that that monolith had been there for about four years.

It has had plenty of company since then. In the last three weeks, reports emerged on social media of similar columns being found in many other places throughout the world, including locations across North and south America and Europe. It has turned into the 21st Century equivalent of crop circles.  A monolith appeared on a hill in San Francisco on Christmas Day. It was made of gingerbread.

“It’s not solid. It was painted black,” reported Woodstock resident Edward Allyn, who said the Zena column was made of wood. He stood next to the monolith for a photo and posted it on Facebook.

“The other ones are shiny, reflective. This was just black and and more rectangular,” said McKenna. He has seen it, but not up close. Looking at the Allyn photo, McKenna estimated that, “it’s maybe 14 inches thick, maybe five feet wide and nine feet tall.”

“Somebody put it there to start a story,” McKenna said. “I don’t think it was there Christmas during the day. It could be gone already.”

According to a Facebook post by Dan Poblocki, a Saugerties resident who is an author of mystery and horror novels for young people, the monolith was there 2:30 p.m. Sunday, but was gone two hours later.