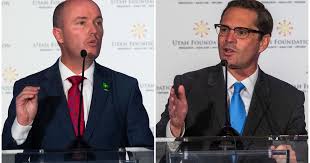 That’s according to results of a new Deseret News/Hinckley Institute of Politics poll released Friday.

A majority of the state’s likely voters, 52%, said they would choose Cox if the election were held today, while 19% said they’d cast their ballot for Peterson, a University of Utah law professor and first-time candidate.

Jason Perry, director of the University of Utah’s Hinckley Institute of Politics, said the poll shows that there’s “still a good portion of Utahns” who have not made up their minds in the race for governor, a post that a Democrat hasn’t won in four decades.

“I think the reason for that is tied to what Utahns care about the most,” Perry said. “It’s the economy and it’s the response to COVID-19” — issues that he called inseparable as the state faces a record-setting spike in cases of the deadly virus.

Most Utahns polled, 42%, said the economy is the most important issue to consider in the governor’s race, followed by the handling of COVID-19 at 17%; education at 11%; taxes and tax reform at 9%; health care at 8%; political party at 5%; and other at 7%.

The poll was conducted Sept. 7-12 for the Deseret News and the Hinckley Institute of Politics by pollster Scott Rasmussen of 1,000 likely voters in Utah. The results have a margin of error of plus or minus 3.1 percentage points.

“It is something that voters are looking at every single day,” Perry said. “That will be the deciding factor for that 22%. These are likely voters. These are people who are going to vote. And when you look at that 22%, they’re evaluating the response to the pandemic … and the impacts on the health of our state and the economy.”

Cox already has a broader base of supporters, with 73% of Republican voters polled saying they’ll vote for him, along with 22% of Democrats. Peterson, however, has the support of just 5% of GOP voters and 54% of Democrats. Unaffiliated voters or those who belong to other political parties also break for Cox, 37% to 21% for Peterson.

Given those numbers, the Democratic candidate has his work cut out for him, said Perry, who held key positions under two Republican governors before joining the university.

“This is a commanding lead at this point, and Chris Peterson is going to have to try to make inroads” among members of his own party as well as competing with Cox for undecided voters, he said. “People are not just going with their party in the governor’s race.”

“At this point in the election cycle, 22% being unsure is first, a huge opportunity for Chris Peterson. More importantly than that, it’s an indicator that voters who may traditionally have gone with a Republican candidate are very concerned about where our country and our state are going,” he said, particularly with the pandemic.

Merchant said neither President Donald Trump nor the Herbert administration have done enough to address the crisis, even though results of the same poll released earlier this week showed Utahns believe they’re better off now than they were four years ago, but the country isn’t better off.

“Most voters want to see the country moving in the right direction,” the Democratic Party leader said, adding he believes that “as we get into the final weeks of this election, a lot of those people will likely come down on Chris Peterson’s side. His message is one of being rational.”

“I’m not surprised to see Spencer Cox so far ahead and I am convinced that most of those undecideds will break for Cox when they get to meet him,” Brown said. “He comes across as very authentic, which is why people like him.”

He said Cox also has the advantage of being better known than Peterson, largely due to the hotly contested Republican primary. The lieutenant governor secured his spot on the November ballot by beating former Gov. Jon Huntsman Jr., former Utah House Speaker Greg Hughes and former Utah GOP Chairman Thomas Wright in June.

“We’re going to see occasional spikes between now and November and I think people understand that, but more importantly, Utahns see where they are in comparison to other states,” he said. “We are doing a really good job of staying open compared to other states. I think that reflects very positively on Cox.”

Peterson called Friday for the governor to replace Cox on the task force overseeing the state’s COVID-19 response, saying the lieutenant governor “has crossed out of his lane and usurped the function of the department of health” and should stick to his constitutional role overseeing elections and lobbying.

“Lt. Gov. Cox is a good person, but with respect, his expertise has been elections and lobbyists; he should stick to that and let our medical professionals and scientists do their job,” Peterson said, warning, “Hundreds of Utahns will die alone and in pain and our economy will continue to struggle if we do not immediately begin following the advice of scientific experts.”

Cox’s campaign manager, Austin Cox, dismissed the suggestion that the lieutenant governor be removed from the COVID-19 task force.

“As he’s said from day one of the pandemic, the state’s response to COVID-19 is not political or partisan. Gov. Herbert and Lt. Gov. Cox are working closely with medical professionals, policymakers and citizens across the state to protect public health and rebuild the economy,” Austin Cox said.

Peterson, who is holding a campaign event in St. George on Saturday, said the poll that matters is on Election Day.

“We think the race will tighten as voters investigate candidates,” he said. “Voters need choices and we are proud to be standing up for the interests of ordinary working Utahns across the state. We need a more balanced government that will take on the complicated challenges Utah is facing.”

The Democratic candidate said “decades of one-party leadership has left us with underfunded schools, polluted air, predatory lenders, unlimited campaign donations, watered-down ballot measures and an ineffective response to the coronavirus. It is time for a change.”

Austin Cox said that while the lieutenant governor appreciates “the strong confidence from voters” in the poll, his focus is on the election.

“He will continue to share his message of providing equitable education opportunities for every Utah student and building resilient economies in each of Utah’s 248 cities and towns to earn the support of all Utah voters,” Austin Cox said.

The lieutenant governor began airing his first TV commercial for the November election Friday, shot in an empty first grade classroom in Taylorsville and citing the need for schools to be treated equally when it comes to funding no matter where they are located.