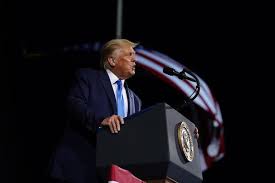 SALT LAKE CITY — President Donald Trump’s tweet Thursday suggesting the November election be delayed because the move many states are making to voting by mail due to COVID-19 means the results would be “fraudulent” comes during Utah’s eighth year of holding by-mail elections.

But Lt. Gov. Spencer Cox, whose office oversees elections in Utah, tweeted there’s no need to put off the vote. And other Utah politicians, including Sen. Mitt Romney, maintain the voting will be done as scheduled.

“While no system is perfect, Utah is a model of showing vote-by-mail can be successful and secure. We are happy to advise and assist other states (and we have) to make sure there is no reason to delay a general election,” Cox tweeted.

The lieutenant governor, who won the state’s June 30 GOP gubernatorial primary, told the Deseret News that when the president tweeted, his office was in the middle of a training exercise run by national security officials to learn how to detect attempts at election interference, such as misinformation campaigns by a foreign government.

“Every form of elections has the potential for fraud. We have seen fraud since the time our country began. It doesn’t matter what method you choose, there are different vulnerabilities,” Cox said. “There’s no question, that voting by mail, there are opportunities for fraud, so we do a lot of things to make sure that doesn’t happen.”

Other states also work hard to prevent and detect fraud, he said, adding that the same type of national security exercises “are happening all over the country. Elections officials take their jobs very seriously and want to do everything possible to prevent fraud from happening.”

His state elections director, Justin Lee, said he was not aware of any instances of voter fraud in Utah in recent years. An investigative reporting project cited recently by a University of California law professor in a Washington Post op-ed found less than 500 cases nationwide among absentee ballots between 2000 and 2012.

Utah, one of the most Republican states in the country, is one of just five — along with Colorado, Hawaii, Oregon and Washington — that conduct elections primarily by mail. Utah started holding some by-mail elections in 2012, giving the state years to transition to the system.

Cox said he’s “glad we don’t have to do it in a few months,” like others states around the country.

Earlier this week, the lieutenant governor had tweeted after the primary election results were finalized that Utah was one of only five states to get an “A” grade in a recent Brookings Institution report on voting during the coronavirus pandemic.

Cox also expressed gratitude to election officials “and to the Legislature and others who had the vision to see the benefits of vote by mail.”

Lawmakers had briefly considered delaying Utah’s primary election, but it went forward as scheduled with changes put in place to combat the spread of the deadly virus by all but eliminating in-person voting. The Legislature has yet to decide if those changes will remain for the November election, but is meeting in special session in August.

Just 5,000 Utahns ended up voting in person in the state’s primary that saw record turnout, Cox said. Voters, who all receive a ballot in the mail, usually have the option to vote in person even before the election at limited polling places.

Trump, who is trailing in the polls behind presumptive Democratic nominee former Vice President Joe Biden, claimed “Mail-In Voting is already proving to be a catastrophic disaster,” in a string of tweets Thursday. They also accused Democrats of knowing it’s “an easy way for foreign countries to enter the race.”

In another tweet, the president warned: “With Universal Mail-In Voting (not Absentee Voting, which is good), 2020 will be the most INACCURATE & FRAUDULENT Election in history. It will be a great embarrassment to the USA. Delay the Election until people can properly, securely and safely vote???”

Chris Karpowitz, co-director of BYU’s Center for the Study of Elections and Democracy, said the president doesn’t have the power to delay the election under the U.S. Constitution, which “clearly and unequivocally gives Congress the power to determine the date and the time” and mandates that it is the same throughout the country.

“Congress has chosen the date and it has been the same since 1845,” he said.

“I don’t know if the president’s tweet, which ended with a question mark, was supposed to be a serious proposal or simply another way of dividing the country and distracting from the poor economic numbers today, but either way, it raises doubts about a core pillar of American democracy, which is the peaceful transfer of power and respect for the consent and will of the people,” the political science professor said.

He said the tweet is also inaccurate because there is no reputable evidence that levels of fraud increase when voting is done by mail.

“Utah is a great example of that. Not only has vote by mail allowed us to hold successful primary elections in the middle of a pandemic, it has also decreased costs and increased participation,” Karpowitz said. “Those are two virtues that all Utahns and all Americans should want in our electoral system.”

This isn’t the first time Trump has said something about the election process that has rubbed Utahns the wrong way. After his surprise victory over former Secretary of State Hillary Clinton in 2016, Trump tweeted about “millions of people who voted illegally” and “serious voter fraud.”

Cox said then that Trump’s claims were “dangerous” and eroded confidence in election results, and should be toned down.

“It’s unfortunate that those are being brought up without any evidence, completely unsubstantiated. It does erode confidence in what is the bedrock foundation of our democratic republic, of our country,” Cox said in 2016. “I feel it’s dangerous.”

He raised similar concerns with the president’s latest tweet, but noted four years ago, Trump was challenging the results of an election that had already taken place. Now, Cox said, the president “is warning against what could happen in an election. Obviously, both can be problematic and I’m not trying to downplay that.”

The lieutenant governor said “anything that undermines the confidence of Americans is critical and dangerous. Again, this is the foundation of the fabric of our social order, and of our government. We take it very seriously in the state of Utah.”

Cox said it was important for him to respond to the president this time on Twitter because he feels “very strongly that the election needs to happen in its normal course. We’ve faced very difficult situations in the past and not changed the dates of the election and again, I can see no reason right now why that would need to occur at all.”

There wasn’t much support Thursday for Trump on the issue, even among his Republican allies in Congress.

Utahns pointed to the state’s success with by-mail voting.

“I’m a fan of voting by mail. Secondly, of course we are going to have an election on time. It’s unthinkable that that would not be the case,” Sen. Mitt Romney, R-Utah, told reporters. He said “the election will be held on the date set by Congress, the historic date.”

“With regards to mail-in voting — in my state, we’ve had it for some time. It works extremely well,” he said.

Rep. John Curtis, R-Utah, said “I believe the election will proceed as planned with measures ensuring that Americans can vote safely and securely— as we do in Utah. If circumstances arise, then Congress will be the one to determine a delay, as is our constitutional duty,”

Curtis said in a tweet: “The problem is not mail-in voting, the problem is ballot harvesting and mismanagement of election procedures. Thanks to leaders like @SpencerJCox and @Amelia4Utah, Utah has a history of successful mail-in elections and should be looked at as an example of how to do things right.”

Rep. Chris Stewart, R-Utah, a staunch defender of the president, tweeted simply “I do not support delaying the election. Congress sets the election date, not the President.”

However, Stewart also told the BBC that Trump had a valid point.

“Can you ensure the accuracy of mail-in voting? Now in some states you can. In my state in Utah, for example, we’ve been doing it for quite a while, but we’re a small state with a relatively small population. It’s harder to do on a national scale,” Stewart said in an interview with the British news service.

“The president’s dumpster fire on Twitter should not be an excuse to delay the elections that are the bedrock of our constitutional republic. After the worst economic and public health crisis in a century, it’s time for a change,” Peterson, a University of Utah law professor, said.

The left-leaning Alliance for a Better Utah also weighed in.

“Utahns are proud of our state’s robust vote-by-mail program. We are an example to the entire country of how elections can and should be run, especially during a public health crisis when it is so important for people to stay home to stay safe,” the alliance’s executive director, Chase Thomas, said.

Thomas said Trump has no authority to alter the election timing and noted that “even if Congress were to move the date, his term ends on Jan. 20, 2021. Trump and his congressional enablers are using low-level tactics like this tweet to sow confusion and create chaos. It won’t work. Trump knows that the clock is ticking on his time in the White House, and there’s nothing he can do to stop it.”

Utah GOP Chairman Derek Brown said the state’s county clerks “have effective procedures and safeguards in place to address voter fraud. Our system has integrity and has worked well, including in the most recent primary election a few weeks ago.”

Brown said the president’s concerns “are likely highlighting states that, unlike Utah, do not have” such safeguards.