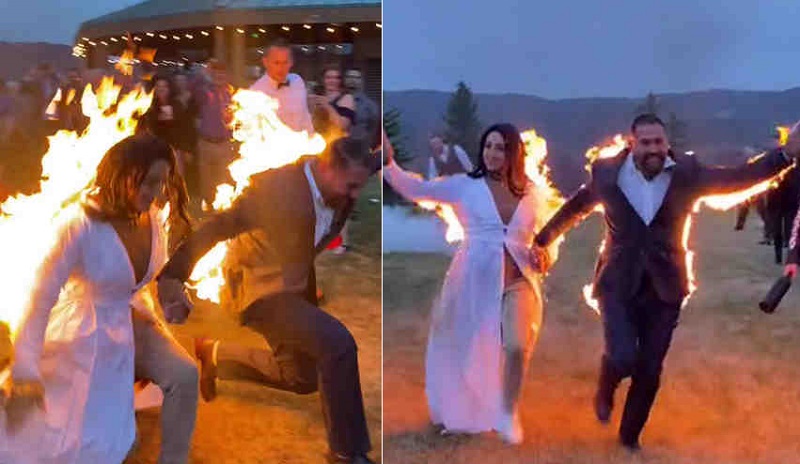 Ogden, Utah – During their May 7 wedding in Utah an Ogden couple purposely lit themselves on fire.

Ambyr and Gabriel Jessop, both work in the TV and film industry where they do professional stunt work.

In order to give friends and family a firsthand look at the work they do while on set, Ambyr came up with the idea to do a stunt during the wedding.“People were like, is this…? are they actually going to…? OK, they’re lighting themselves on fire,” Gabriel remembered of his guests right before the stunt happened.

For the two stunt professionals who have worked on shows and movies like “Yellowstone” and “Hereditary,” lighting themselves on fire is sometimes part of their job.“Why do sparklers? Why do birdseed or whatever? Let’s go big and light ourselves on fire,” Gabriel said he thought after Ambyr proposed the idea.

Gabriel has worked in the art department in the film industry for the last 25 years besides doing stunts and Ambyr for the last six years. “It was pretty great, I was excited, it was fun,” Ambyr said. “I was like, that was so cool, as I was getting doused down, it worked out perfectly.”

For roughly 25 seconds the couple was on fire, they had three fireproof layers on under their dress and suit and were doused in the fire-resistant gel. They also pulled a permit with the fire department and had 650 gallons of retardant on standby. A fire truck was also on the scene. “It wasn’t like we just dove into it — a whole stunt team got together and we did quite a few rehearsals,” Gabriel said.

According to the couple, while this might look crazy to others, they felt in their element while doing the stunt, which they said takes a lot of concentration and communication. “That’s like the most connecting thing ever,” Ambyr said. “Very rarely do you get to do stunts with your partner?”

“People are like, well, now she can’t pass her dress on. Well, that’s not my thing anyway. If I’m going to get married, I’m going to do it my way,” Ambyr said, laughing.

The couple did this stunt with all the proper safety precautions in place and don’t recommend anyone try this.