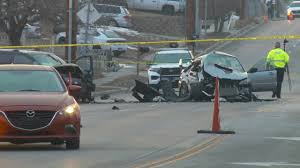 KEARNS, Utah – Officials with the Unified Police Department said one woman was killed and two were hospitalized in a crash near 5600 West and 5830 South.

UPD Sgt. Melody Gray said the crash happened just after 8 p.m. Officers had responded to Thomas Jefferson Jr. High School on a “keep the peace” call with a 26-year-old woman.

After the meeting, Gray said the woman got in her vehicle and turned to go northbound on 5600 West.

The driver of the southbound vehicle, a 37-year-old woman, was killed in the crash. She was extricated at the scene of the crash by officers, who attempted lifesaving procedures.

She was identified as Cecilia Ruby Chavez from Magna.

A passenger in the southbound vehicle, who Gray said was the driver’s 14-year-old daughter, was hospitalized in serious condition.

5600 West was closed in both directions while police investigated the crash.