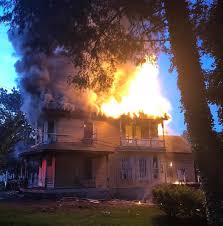 WEST VALLEY CITY, Utah – A man was taken to an area hospital for smoke inhalation after a fire broke out in a West Valley shed early Wednesday morning.

Crews with the West Valley City Fire Department responded to the scene around 4 a.m.

Officials said they believe the man was sleeping in the shed or detached garage when his heater malfunctioned, causing the fire.

No update on the man’s condition was immediately available.