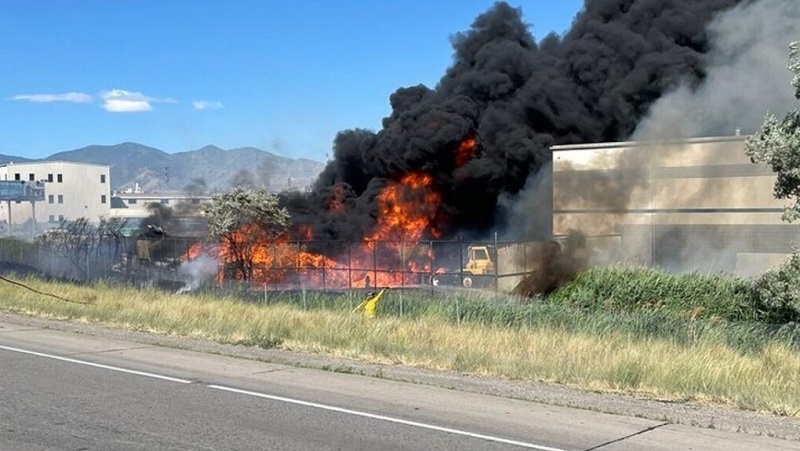 According to the Utah Highway Patrol, the ramp from I-215 southbound to SR-201 westbound is closed due to the fire which broke out just after 10 a.m.

The ramp was opened momentarily before the area began smoldering again, forcing another closure. UDOT estimates the closure will last until about 4:30 p.m.

According to fire officials, the blaze began as a brush fire that quickly spread to some nearby plastic material, causing a huge plume of black smoke that spread over the Salt Lake Valley. No structures were damaged during the fire and no one was injured.

Conditions were ripe for a fire to break out, according to fire officials on the scene.

“We have talked in the past how these high winds and the heat and the low humidity that we’re experiencing, we just came out of that Red Flag Warning over the past five days, so any type of ignition source could have set this off,” said Salt Lake City Fire Capt. Shaun Mumedy.

Mumedy mentioned anything from vehicles dragging from chains to someone throwing out a cigarette as a possible culprit. Crews were able to completely douse the fire just before 11 a.m., but the highway remains closed.

Officials are asking residents to be extra careful and diligent when it comes to fire safety.

“We are going to continue this theme all summer,” said Mumedy. “Citizens are going to get tired of it, but we hope eventually it burns in. We are at the beginning of a hot and dry summer. This is a small example of how rapidly a grass fire can spread into an adjacent business into a home. Had this been near home, you can see how these winds could push a fire into a house.”