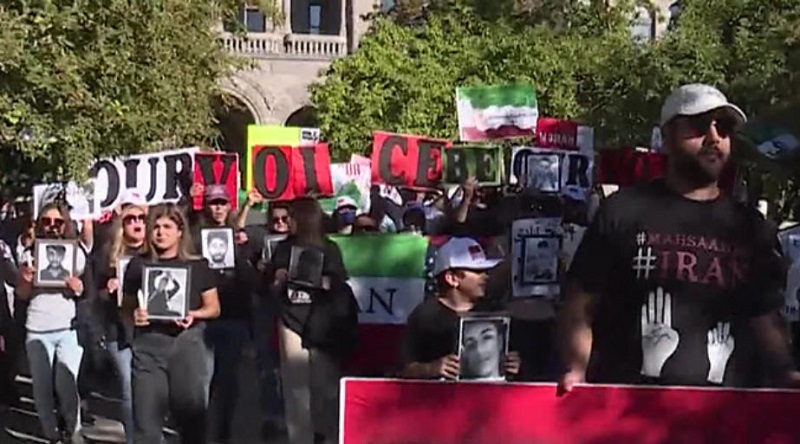 Salt Lake City, Utah — On Saturday, a sizable throng marched from Washington Square to the steps of the Utah State Capitol to express support for those in Iran who are suffering. “They are not asking for much. The women in Iran are asking for basic human rights. The government in Iran is just a fraudulent act, and they will never have peace unless America steps in to help,” Amy Zadh said.

Zadh is a member of the University of Utah’s Persian Students Association. “I was very emotional while I was marching. I am showing up for my country. I am safe here; that is not the case for so many who are threatened by the morality police,” she said.

Mahsa Amini, 22, of the Iranian Kurdish village of Saqez, was detained last month in Tehran by the morality police, who uphold the Islamic Republic’s rigorous dress code for women. She was accused of wearing “unsuitable apparel.” Protests followed her death all around the world. One of the 153 marches held in cities throughout the world was in Salt Lake City.

Another marcher today was Navid Farzan. Farzan said that the Iranian government kidnapped him in 2009 while he was participating in a pro-democracy movement there. “I was in tears today as I was marching. The world doesn’t know the terror and inhumane conditions happening in Iran. I lived it. Tens of thousands of people are being tortured, beaten, and raped. Please hear our voices. There is a complete media blackout in Iran, and yet Iranians are standing up against this corrupt regime,” Farzan said.

According to M.G., a previous president of the Persian Students Association at the University of Utah, there has been no support from the institution. “If an Iranian is going to get out of Iran, it will be because they attend school in the United States. We have a large body of Persian students at the University of Utah. We have asked U of U administrators for support, and we have been ignored,” M.G. said.

Students showed their dissatisfaction by complaining that neither the university president nor the school press would cover the protests in Iran.

Those who marched on Saturday hoped the Biden Administration would shift reliance on Russia for gas and oil trading to Iran. Students advised those in need to get in touch with their congressional representatives.