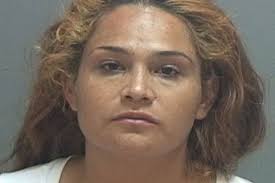 WEST VALLEY CITY, Utah — A Phoenix woman was sentenced to 108 months in federal prison for kidnapping a 17-year-old boy in an attempt to collect a heroin debt from his mother.

34-year-old Nadia Carolina Avalos was sentenced on Tuesday morning before U.S. District Judge David Sam to 108 months in federal prison, to which there is no parole, and will serve 36 months of supervised release upon completion of her prison sentence.

28-year-old Issa Jassim Al-Sadoon, also of Phoenix, previously pled guilty to kidnapping in the case and was sentenced on July 8, 2020, to 120 months in federal prison and 36 months of supervised release. 43-year-old Juan Carlos Moreno-Trinidad, also of Phoenix, pled guilty in the case and is awaiting sentencing in October. Subject court approval, Trinidad’s plea agreement stipulates a 144-month federal prison sentence.

Federal prosecutors say the trio traveled to Utah in August 2018 to collect a debt owed to Oscar Rene Chacon Lopez, also known as Gio, from a West Valley City woman. Chacon, according to federal prosecutors, is a named defendant in the case, is a citizen of Honduras, and remains a fugitive.

“According to a complaint filed in the case, the defendants conducted surveillance on a business in West Valley City, operated by the woman,” read a statement from the U.S. Attorney’s Office in the District of Utah. “After they were not successful in collecting the money from the woman, Chacon, calling from Mexico, directed them to kidnap the woman’s 17-year-old son.”

Moreno-Trinidad and Al-Sadoon kidnapped the 17-year-old victim at gunpoint and, with Avalos, kept the boy at a hotel room in Murray, Utah, while Chacon, calling from Mexico, attempted to collect the drug debt from the mother.

In their attempt to collect, the kidnappers instructed the victim to call his mother and tell her he had been taken by individuals who wanted money from her — releasing a short video of him inside her truck, which they had also stolen.

“In the following hours, Chacon sent numerous typed text messages and recorded voice messages,” stated the U.S. Attorney’s Office. “He threatened her son and other children at her home with physical violence.”

According to a federal criminal complaint, Chacon had directed the kidnappers to not release the victim until after he was paid at least $10,000.

Later in the evening of the day of the kidnapping, FBI agents, Utah County Major Crime Task Force detectives, and West Valley City Police Department officers were able to locate the victim and return him safely home.

“Because of the cooperation between the FBI, Salt Lake Police Department, West Valley Police Department and the Utah County Major Crimes Task Force, a 17-year-old victim of kidnapping was safely recovered and returned to his family,” stated Lt. Jeff Bailey, Director of the Utah County Major Crimes Task Force. “Members of a drug trafficking organization, responsible for this violent act, were apprehended due to the hard work and effort of each detective, officer, and agent involved in this case.”

“Organized crime is active in Utah,” stated U.S. Attorney John W. Huber. “As the United States Attorney for Utah, I have made it a top priority to confront and dismantle criminal organizations. This case is a glaring example of why we must keep law enforcement pressure on drug traffickers who are drawn to our neighborhoods by an unhealthy demand for illicit drugs.”

“A fugitive leader in a narcotics trafficking organization, operating from south of the border, directed a ransom kidnapping in an otherwise safe Utah neighborhood,” he said. “As Utahns, this is something we simply cannot tolerate.”

A continuing investigation by the Utah County Major Crimes Task Force and the FBI in Salt Lake City revealed Chacon had managed and directed, as part of a drug trafficking organization primarily distributing heroin, the activities of multiple co-conspirators in Utah, Arizona, and Minnesota. Four other cases were filed in Utah as a result of this investigation leading to the seizure of several kilograms of heroin and several cash seizures.

Another defendant in the case, 27-year-old Jeanette Mejia, also of Phoenix, pleaded guilty to conspiracy to distribute heroin in March 2020. At sentencing in October 2020, she faces between 12 and 36 months in federal prison.

“As we learned in court, Ms. Avalos’s problems with the law stem from illicit drugs, which often lends itself to criminal behavior and violence,” stated Special Agent in Charge Paul Haertel of the Salt Lake City FBI. “Cases like this underscore the larger issues associated with the drug trade, which is why the FBI and our partner task forces are committed to investigating activity that afflicts our communities.”