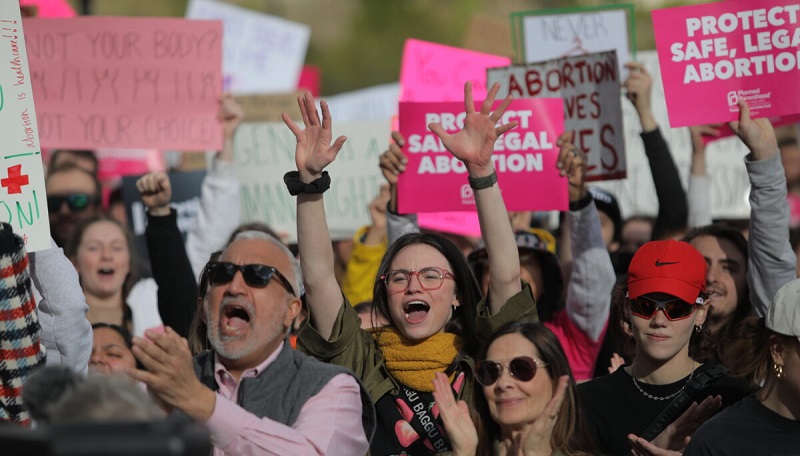 Salt Lake City, Utah – On Tuesday, on the steps of the Utah State Capitol, a rally was held in Salt Lake City, in protest of the apparent decision by the Supreme Court to overturn Roe v. Wade.

The draft opinion, leaked to Politico, suggests the Court could be poised to overturn the landmark case that legalized abortion nationwide. Chief Justice John Roberts confirmed the validity of the draft on Tuesday but said it does not necessarily reflect the final decision of the court.

According to Jessy Salas, she is rallying behind an issue deeply personal to her. “I was actually 13 when I got pregnant,” she said. “It was nonconsensual.”

Salas openly talks about her own abortion, hoping her story will get people to support reproductive rights. “I’m a junior in college,” she said. “I’m amazing, and I would not have any of what I have had I carried a baby, you know?”

Dozens of Utahns like Salas are speaking out against the opinion that would overturn a decision that has protected a woman’s right to access an abortion since 1973. People who are anti-abortion don’t understand the complexity of the issue, said Salas. “’Babies are being killed with abortions,’ but what about mothers who have stillborns who need to have the same procedures to make sure that they can have more babies?” she said.

According to organizers of Tuesday’s rally at the Capitol, they were not shocked to see the big turnout at an event announced merely hours beforehand.

80% of Utahns don’t believe the state needs to have any more restrictions on abortion,” said Valentina De Fex, Staff Attorney for Americal Civil Liberties of Utah. “It was amazing to see all the people here today, different generations.”

The Americal Civil Liberties of Utah wants everyone to remember that safe abortions are still legal in the state for now. “The people of Utah are going to make sure that their voice is heard,” said De Fex.

Post Malone and his girlfriend are expecting their first child