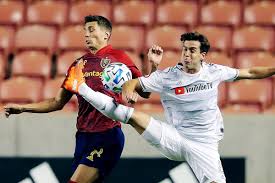 A Real Salt Lake defense that had been leaking goals as of late rediscovered some of its 2019 defensive swagger on Wednesday night at Rio Tinto Stadium.

Facing the highest-scoring team in MLS, RSL was tidy at the back most of night rolling to the 3-0 win over Los Angeles FC, vaulting back up into a fourth-place tie in the Western Conference standings as Andrew Putna earned his first shutout of the season.

LAFC, meanwhile, continues to languish with the worst defense in MLS as it has conceded 22 goals in 10 matches.

“At the end of the day they score so many goals they can win any game and we were ready for that today,” said RSL midfielder Albert Rusnak.

Real Salt Lake rested most of its regulars on Sunday night in Minnesota, which ended in a disappointing 4-0 loss. RSL coach Freddy Juarez said it was a necessity to give some key players a rest, and three nights later he got the quick bounce-back win against a makeshift LAFC lineup.

RSL wraps up the busy stretch of five games in 15 days on Saturday night when it hosts the Colorado Rapids with a chance to make another big jump in the standings.

Damir Kreilach, Justin Meram and Rusnak all found the back of the net against LAFC in front of 4,147 fans at Rio Tinto Stadium.

Real Salt Lake opened the scoring just eight minutes into the match as Kreilach headed in a cross from Maikel Chang, who quickly sent a deflected corner kick back toward the top of the six-yard box.

The goal was Kreilach’s team-leading fifth of the season, and it was only the second time in 10 matches this season RSL scored first goal. The only other time came against Colorado in the MLS is Back Tournament in Orlando back in July.

Kreilach coincidentally enough scored in that match as well.

“Damir is a classy player. He has the knack for finding those free spots in the box and I think Maikel Chang played a perfect ball into him and he found that gap. Damir, he is the LAFC killer for us,” said RSL assistant coach Tyrone Marshall.

That inexperience was obvious at times as the visitors struggled in the opening half hour, with RSL firmly on the front foot creating multiple chances often off LAFC giveaways. It had multiple chances to tack on another goal or two, but several players failed to hit the target on clear-cut chances.

Not surprisingly, Bradley replaced three of those 2020 debutants at halftime with forward Latif Blessing and defenders Tristan Blackman and Eddie Segura all subbing on. The three players had started every match for LAFC so far this season and gave LAFC a much needed experience boost.

Before LAFC’s dynamic attack had a chance to put RSL under any pressure though, it found itself trailing 2-0.

RSL doubled its advantage just two minutes into the second half as Meram poked in a goal from about 4 yards out as four LAFC players laid on the ground around him after they failed to clear the initial corner kick.

The goal was Meram’s second of the season, and another off of a set piece.

“That was the key goal,” said Marshall. “The boys did what they had to do on the LAFC side, which going in one goal down is not a bad thing for the squad he put out there. Having an opportunity to put in (three) guys who normally start for them, to see if they can salvage something from it. So it was key for us to get that goal early to put our stamp on it. It killed their rhythm.”

In 77th minute Rusnak put game away with a penalty kick after a handball in the box blocked a goal-bound shot from Justen Glad.

LAFC keeper Pablo Sisniega tried to get in Rusnak’s head before the penalty with a little trash talk. Sisniega was even bating Rusnak to shoot to his left before Rusnak took the penalty. Rusnak ended up banging the shot to Sisniega’s right.

“I didn’t say anything before I took the penalty. But if you’re going to speak to me before I take the penalty, I don’t know why you’d expect me to be quiet after the penalty,” said Rusnak.

Some LAFC players took offense to Rusnak talking back to Sisniega after the PK, but Rusnak said the whole thing was no big deal.

Jazz look to improve defense in the off-season