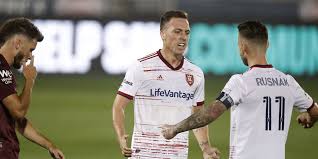 The second 45 minutes was an entirely different story. A simple insertion of Maikel Chang into the lineup at halftime changed the entire complexion of RSL’s attack, with the visitors rallying for the 4-1 victory at Colorado as RSL improved to 2-1-3 on the season.

Saturday’s match was the first of RSL’s busy stretch of six games in 22 days, and with the next four all against very good Western Conference teams, picking up the three points at rival Colorado was extremely important.

With Real Salt Lake trailing 1-0 at the break, Kreilach, Chang, Corey Baird and Justin Meram all scored goals to spearhead the impressive rally.

“We told ourselves, ‘We’re going on the road for Game 1 of six of this stretch, let’s get off to the right foot.’ That second half was a beautiful game of ours,” said Meram.

RSL was forced to make an early substitution when Douglas Martinez left for precautionary reasons in the 15th minute after he was kicked in the head with the ball from close range. After being looked at by trainers for several minutes he returned to the field, but that lasted just a minute as he was replaced by Meram.

With Martinez’s departure, Kreilach shifted up to the lone striker position, with Albert Rusnak shifting into the middle. It forced RSL to play without speed up top, which wasn’t the game plan initially with Martinez.

Colorado scored the lone goal of the first half in the 38th minute as it capitalized on a soft giveaway in the midfield by Meram.

RSL’s right back Aaron Herrera was caught up field when the ball was turned over, and he was forced to chase the play immediately. He finally caught up just as Diego Rubio tried to cut a pass back from near the end line, with the ball deflecting off the arm of a diving in Herrera and past Andrew Putna for the 1-0 lead for the Rapids.

Even though RSL had the better of possession in the first half, it didn’t create much out of those chances.

“I think the first half we were pinned back and many guys were showing for the ball in our own half, we weren’t really stretching the backline,” said Meram.

At halftime, RSL tried to inject more speed up top by inserting Chang into the match for Everton Luiz and shifting Baird up top as lone striker. Meram said Chang was the “game changer.”

Real Salt Lake’s urgency in the attack was obvious after the halftime whistle, but it was a wonder goal in the 57th minute by Kreilach that ultimately unlocked the defense and leveled the score 1-1.

After three Colorado defenders collapsed on Meram about 25 yards from goal, he laid the ball off in the path of Kreilach who crushed the ball with a one-time shot into the upper right corner of the net.

In terms of quality, it was every bit as impressive as the “Karate Kid”-type goal against LAFC in the playoffs two years ago.

After conceding the equalizer, Colorado kind of imploded over the final 30 minutes as RSL tacked on three more to run away with the win.

Chang scored his first RSL goal in the 76th minute as Colorado keeper William Yarbrough spilled a rebound on a Meram through ball, with Chang positioned perfectly to tap it in.

Chang’s big night wasn’t done. He delivered the ball to both Baird and Meram on their goals to seal the victory.

“If I’m not mistaken, he’s one of the assist leaders in USL history, and you saw that today. When he crosses it, a lot of times it gets to someone,” said RSL coach Freddy Juarez about Chang, who got his start with the organization with the RSL Monarchs.

RSL returns to action this Wednesday at Rio Tinto Stadium against Los Angeles FC, and it will have the luxury of up 5,000 fans while Colorado was forced to play in an empty stadium.