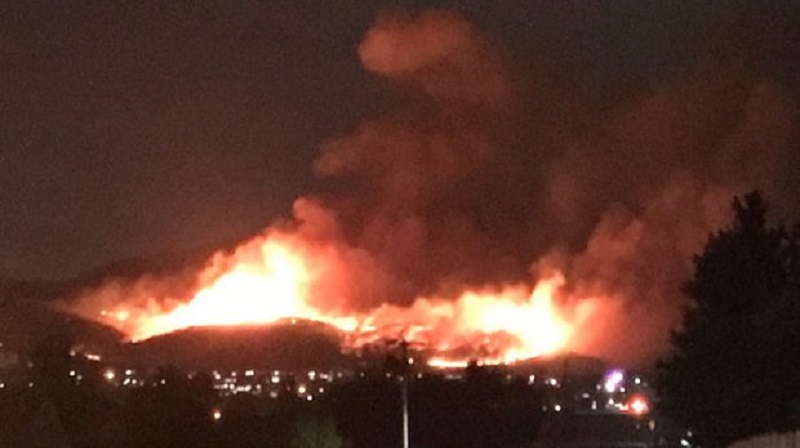 Centerville, Utah — According to fire officials, as of early Monday afternoon, the Deuel Creek Fire has burned more than 100 acres and is still zero percent contained.

For the past year, Megan Bruschke, her husband, and her kids have lived at her parent’s house. While they were watching a movie, they say they heard fireworks going off outside late Sunday. “My husband said, ‘I can smell the fireworks’ and then about five minutes later he said, ‘I can smell fire,'” said Bruschke.

According to Bruschke, by 11:30 p.m. on Sunday, all three kids and her mom had been evacuated out of the home.

“Your heart starts pounding so fast and you start to have that moment of panic, what could this really mean?” said Bruschke.

The community has been showing their appreciation for the firefighters and crews who have worked throughout the day to keep the residents and their homes safe from the fire.

According to Janie Wilkinson, the wife of Centerville Mayor Clark Wilkinson, she was helping coordinate donation efforts for the firefighters. “We just put a thing out on Facebook and just said, look, here’s what they could use, you know fruit snacks that are pre-wrapped, baked goods that we can put in bags,” said Wilkinson.

She saw about 70 people come through the doors of city hall in a two-hour span, dropping off goods and offering to volunteer their help, Wilkinson said.

“Am I touched, absolutely, not surprised, because we live amongst really good people,” said Wilkinson.

According to fire officials, they think the fire started at the bottom of Deuel Creek and believe the fire was human-caused.

The fire investigator will officially determine the cause of the blaze after they’ve gone in and done their initial investigation, according to Sierra Hellstrom, a spokeswoman for the Northern Utah Type 3 Incident Management Team. “We were able to bring in the aircraft this morning, you’ll be seeing bucket drops across the fire flanks to assist the firefighters in the areas where they’re seeing higher flame lines, the winds are definitely the unknown emergency variable here,” said Hellstrom.

Residents like Bruschke are thankful for everyone who pitched in and helped during this fire. “We had a lot of people that spent a long night helping us do this,” said Bruschke.

According to Hellstrom, fire crews and more engines from across the Wasatch Front will help assist with the fire.

They encounter multiple groups of hikers trying to hike up the area or come across the Bonneville Shoreline Trail and are asking people to stay out of the area as they continue to work to contain the blaze, Hellstrom said.

RV completely burns down on I-16, shutting down southbound traffic