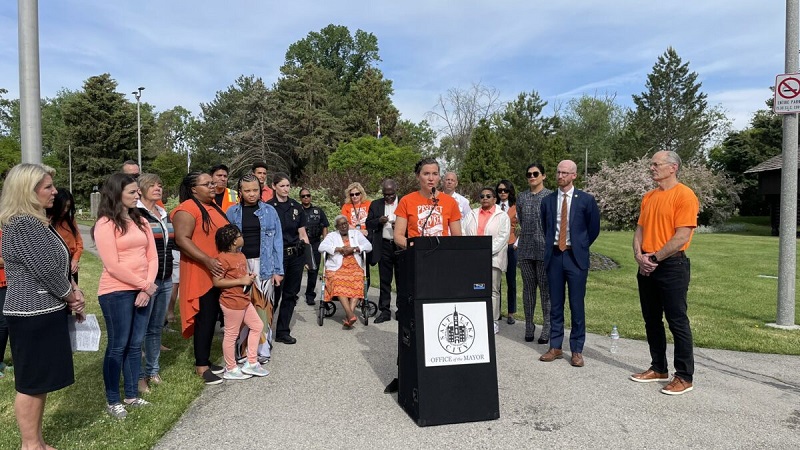 “The goal is to raise awareness,” said SLCPD Chief Mike Brown. “To maybe how many guns we have here in Salt Lake City or surrounding communities that don’t need to be in homes.”

Without questions or ID in exchange for gift cards provided by the Salt Lake City Police Foundation, volunteers turned in their unwanted firearms to authorities.

For this event, the foundation raised around $10,000. Those that turned in their guns received a $50 gift card and a $100 gift card for assault-style weapons like AK-47, AR-15, and SKS model weapons.
Only one gift card per person was given, no matter how many guns that person turned over. 103 firearms were turned in, including 24 pistols, 28 revolvers, 13 shotguns, and 38 rifles, according to Salt Lake City police.

“A lot of these people are down here voluntarily turning in their guns,” Brown said. “Maybe these are guns they don’t want anymore, that they don’t know how to dispose of, so we made that opportunity available.”

“Today, there are 103 fewer firearms out in our community, which means 103 fewer guns that could end up in the hands of a person willing to inflict harm,” Brown expressed. “We would be naïve to think this will be the solution to gun crimes in our community, but the Salt Lake City Police Department is fully committed to doing everything we can to reduce the chance of a firearm being used illegally, lost, stolen, or abandoned.”

According to Brown, anyone who missed the event can contact their local police department to turn in their firearms.

Use FireSense to avoid wildfires