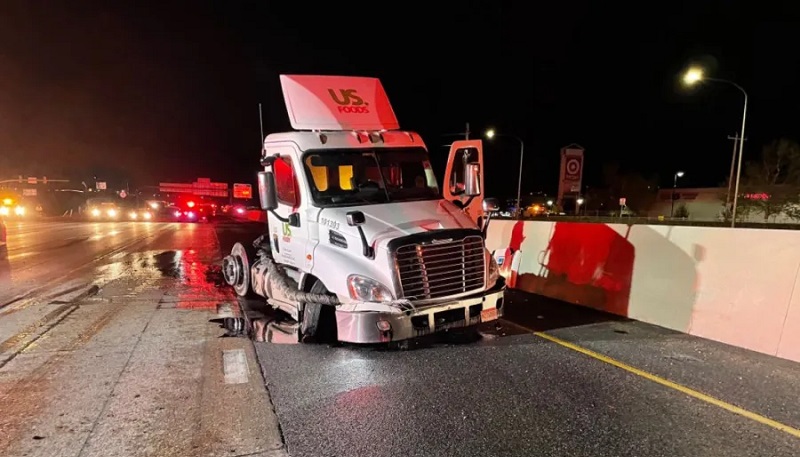 Davis County, Utah – On Monday morning, a semi-truck crashed into a powerline has shut down lanes along I-15 in Davis County.

The incident happened when a downed powerline was hanging near Parrish Lane around 4:11 a.m., UHP said.

According to authorities, a semi-truck hauling a container on the southbound lanes of I-15 struck the powerline, causing the vehicle to crash and rollover. The collision caused the semi-truck to leak fuel all over the highway.

UHP says during the crash, the semi-truck struck the center median, sending concrete debris spilling into the northbound lanes. UHP says multiple vehicles were damaged by the flying debris.

According to officials, later on, a Union Pacific train also struck the fallen power lines. All train service has been halted at this time due to the incident.

Lanes along I-15 in both directions were closed at the time, but northbound lanes have since reopened. Currently, only one southbound lane has been reopened as crews work to clear the scene.

As an alternate route of travel in the area, drivers headed in the area can use Legacy Parkway.

Crews are working to determine the cause of the fallen powerline.

Utah Miss Amazing: People with disabilities have every ability to reach for their dreams