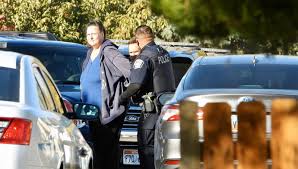 According to West Valley City Police, the incident began in the driveway of a Latter-day Saint stake center at 6710 W 4145 S.

Police said the man in the driver’s seat of the Ram was either passed out or asleep, and they also observed drug paraphernalia, a holster and a magazine—but no firearm—in the pickup truck.

Officers opened a door of the pickup truck, but the man was unresponsive until they touched his arm. At that point, the man put the pickup truck into drive and accelerated.

The officer suffered cuts to his head and other injuries to his shoulder, hip and leg. He went to a hospital for treatment and has been released.

“He suffered some minor injuries, some abrasions, some cuts. We took him to the hospital just to be evaluated for anything internal, do some x-rays, but he’s gonna be OK,” said Sgt. Robert Brinton, West Valley City Police Department.

“One vehicle was struck on the front passenger side front bumper/fender area and sustained a flat tire. The other vehicle was struck head on and pushed through the parking lot, across the street, and up on a resident’s front lawn area.

Police determined the Ram had been stolen from a location in the jurisdiction of the Unified Police Department. Around 8:20 a.m. a resident of the neighborhood near 6200 W King Valley Rd. reported seeing a truck that matched the description of the stolen vehicle.

“Officers responded and the driver fled the area. The suspect abandoned the truck in a field in the area of 7300 W Copper Hills Drive and fled on foot to a family member’s home nearby,” the news release said.

Police surrounded the home and the suspect surrendered peacefully.

The suspect, whose name has not been released, is expected to face several charges, including aggravated assault on a police officer and two counts of fleeing.

West Valley officer hit by pickup truck, dragged as man tried to get away