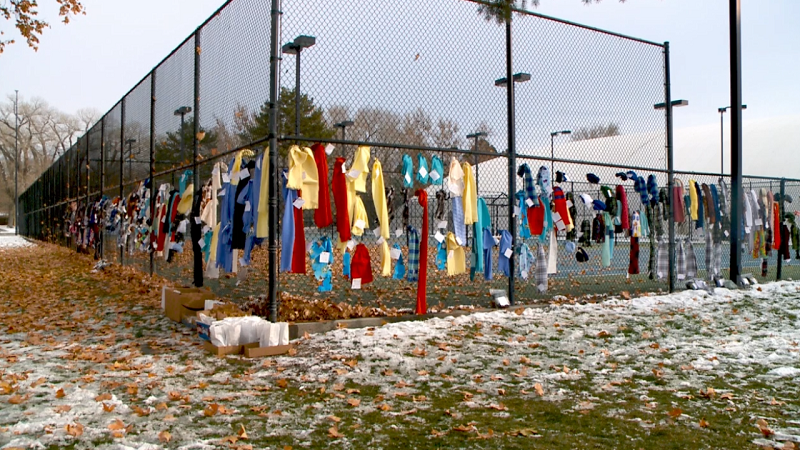 Salt Lake City, Utah — With a project bigger than ever before, a local Facebook group is back for its fifth year of distributing handmade scarves and hats to Utahns in need during the holiday season.

“This year, we had — I just did the totals — 3,603 items,” said founder Suzette Aposhian. “So it is huge. It’s grown like crazy. And just keeps growing by leaps and bounds.”

Scarfs in the Park is more than a Facebook group — it’s a community where people of all talents and abilities can come together to bring a little warmth to Salt Lake City.

The Sandy Senior Center is the largest group to contribute to the project with handmade items.

“So we have a lot of senior centers that help participate with us. And we had some Girl Scout troops this year, we have people that donate yarn, we have people that help put on the tags, or maybe their porch is a drop-off place,” Aposhian said. “So there are lots of different ways people help because it really takes a huge village to pull this off.”

On Saturday, group members hung some of the scarves and hats in Liberty Park.

“It’s a way to give back to the community to people who are in need, and there are no strings attached. So if you know a mom needs a hat or a scarf for their child, then that’s fine. Just go pick it off the fence and take it,” Aposhian said.

Salt Lake City isn’t the first to take on this type of project, but according to Aposhian, a woman in Kansas directly reached out to her this past year because she felt inspired by a YouTube video where Aposhian talked about the project.

“It was because the story that you had done earlier was put on YouTube, and that’s how they found me,” she said. “So they ended up starting their little branch out there… I’m excited to watch them grow.”

Aposhian hopes they are able to donate even more items in the future and make a bigger impact for Utahns in need.

As the project sees the end of another success, next year they want to focus more on hats and scarves for children who may not have appropriate clothing for the winter weather.

“We pretty much turn around and start the first of the year, preparing for next year…this year, we’re made aware of a lot of children that are in need,” Aposhian explained. “So I think next year, we’re going to focus a little bit more on children that are homeless, or in the low-income schools, hoping to maybe partner with the pantries and things like that.”