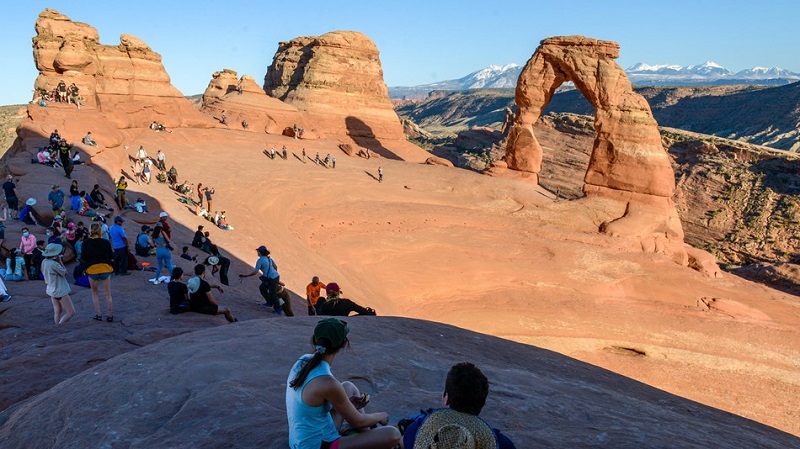 Moab, Utah — With more than 1.8 million people, in 2021, Arches National Park shattered a record for most visitors in the park in a single year.

Since 2010, each year, the park has seen more than a million visitors.

On Sunday, they took their first big step towards addressing the surge of people by rolling out a timed entry pilot program.

The crowds have grown so much that the park itself has had to stop visitors from coming in at times, over the last few years.

The National Park Service has rolled out a timed entry system in hopes of eliminating those long wait times and alleviating overcrowding.

Timed entry into Arches is a pilot program that runs from April 3 to October 3. Those who come to Arches can create an account at recreation.gov and select the date and time they wish to visit. In monthly blocks, the park will release tickets three months in advance. For those without an early reservation, some next-day tickets will be available daily at 6 p.m.

Just a day before the pilot program began, on Saturday the park reached capacity by 9:45 a.m. and suggested visitors try to return to the park in roughly 3 to 5 hours.

A park spokesperson sent the following statement on Sunday night, recapping the first day of the program:

“All of the timed entry tickets were sold for the day, which equates to nearly 2,000 vehicles. The park accommodated those numbers well, so we may adjust our totals in the coming days and weeks.

“As with any new program, some people were unaware of the launch. We did turn around a few vehicles, but fewer than we expected, and many visitors were able to return after 5 pm or make reservations for tomorrow. Overall, the program ran very smoothly for day one.”