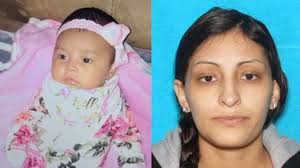 WEST VALLEY CITY  — An Amber Alert that was issued Sunday after a 1-month-old girl was abducted by her non-custodial mother has been canceled, as police are reporting that the infant has been found and is safe.

According to a West Valley City Police Department news release, Leticia Vigil, 29, took the infant on Saturday while the custodial family member was at work and the infant was being cared for by a relative who wasn’t aware that Vigil does not have legal custody.

The baby, Vinia Vigil Islas, was removed from Vigil’s custody on Tuesday by Utah Division of Child and Family Services and was placed in the care of the family member.

The custodial family member contacted West Valley City PD and reported a case of custodial interference, and an officer responded to the home but received no response, the news release says.

“Custodial interference is not an emergency and is commonly a case where police provide documentation for parties involved in custodial disputes,” the news release says.

Investigators had been speaking with family members to gather information about Vigil and they determined that the case met the criteria for an Amber Alert.

In the update on Twitter in the early hours of Monday morning, West Valley City police did not say where the child was found or if she was with her non-custodial mother at the time.