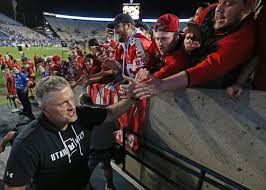 SALT LAKE CITY — Just days before Utah is set to open its delayed season against Arizona at Rice-Eccles Stadium, the university’s athletic department announced a contract extension with its most high-profile coach, Kyle Whittingham.

Whittingham, who enters his 16th season as Utah’s top guy, signed a contract extension through the 2027 season Wednesday. The extension will give Whittingham an extra four years to his current contract, which was previously extended last year in May through the 2023 season.

Whittingham’s previous contract extension was worth a minimum of $22 million over the five-year period. Last season, he was set to be owed approximately $4 million, with various clauses, bonuses and incentives that increased each season he remained as head coach.

Full details of Whittingham’s contract extension can be viewed below, though Whittingham is set to make a base salary of $1,375,000 this year, with a clause to increase $75,000 each year. Whittingham also receives a salary based on radio and television revenue, appearance and speaking fees, the university’s outfitter agreement and other bonus items.

“Kyle Whittingham has established a culture in the Utah Football program that not only achieves success on the field, but also in the classroom, the community and in the development of student-athletes for their future beyond their time on campus,” athletic director Mark Harlan said in a statement. “This has been especially evident throughout the pandemic, as he has steadily demonstrated leadership, patience and flexibility, putting the priority of health and well-being for student-athletes above all else.”

Whittingham’s team most recently won back-to-back South Division titles in the Pac-12 but has fallen short in both conference championship games. Still, Whittingham has a 131-64 record during his time as head coach.

Whittingham thanked Harlan and university president Ruth Watkins for their “unwavering support” of the coaching staff and a “commitment to our football program.”

“This vote of confidence makes it very clear to recruits that our program has the full backing of our university, which is vital to our long-term success,” Whittingham said in a statement.

Utah wrote into Whittingham’s contract last year a clause related to retirement that would allow him to serve as a “Special Assistant to the Athletics Director” for eight seasons, where he would be owed one-eighth of his contract. That clause has since been amended to include a phased version of retirement, which is as follows:

Over the summer, as athletic departments across the country furloughed or cut back staff and athletic programs as a result of the global pandemic, Whittingham agreed to take a pay cut of $365,822 this year, according to the USA Today, which is the second-highest cut in the country. The only other football coach to take a bigger cut was Florida State’s Mike Norvell, who took a pay cut of $465,750.

Whittingham joined the program in 1994 as a defensive line coach and moved up the ranks ever until he was named the defensive coordinator to Urban Meyer before Meyer accepted a head coaching position at Florida after his team went undefeated in 2004.

Whittingham took over as head coach leading up to the team’s Fiesta Bowl appearance, in which Utah beat Pittsburgh in the program’s first BCS bowl win.