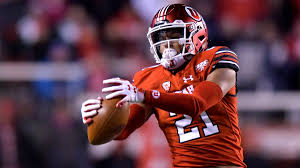 SALT LAKE CITY, Utah – When Utah takes the field for the first time in 2020, they will be wearing the same uniform combination in the Rose Bowl as the 2018 trip to UCLA.

The Utes equipment staff revealed that the team will wear black helmets with white jerseys to go with black pants.

It will be the third straight time at UCLA that the Utes will wear this combination.

When Utah has worn the black, white, black combination, they are 2-3 in the Pac-12 era. Utah first wore that combination at UCLA in 2016 when they knocked off the Bruins, 52-45. That was the game that Joe Williams set the single game school rushing record with 332 yards to go with his four touchdowns.

Two years later in the Rose Bowl, Utah wore the same combo in 2018 when they beat the Bruins, 41-10. They nearly had the same combination in 2014 but had white helmets instead of black.

While most of the uniform will be the same on Saturday, the pants will be a little different.

Since joining the Pac-12 in 2011, Utah is 6-3 against the Bruins, including a 3-1 mark in the Rose Bowl. They have won three straight over UCLA.