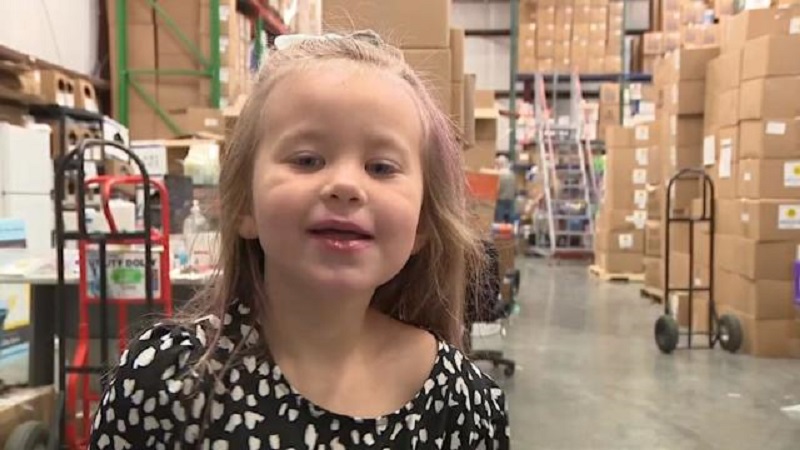 West Jordan, Utah — A 5-year-old girl from West Jordan, on Friday made a donation worth thousands of dollars that will now be sent to help Ukrainian children who were forced to leave their homes.

“We’re going to take these things to the people who don’t have things,” Greta Gingell said.

The donations will be delivered to Ukrainian refugees through the nonprofit Lifting Hands International.

“I did it for a service project for my school,” said Greta, a kindergartner at Oakcrest Elementary.

But her family said it quickly grew.

“When we started this, we just thought it was going to be little, you know like family, friends, but then we had family and friends pass it along and they’ve passed it along and passed it along, to the point where it almost got a little overwhelming,” said Marc Gingell, Greta’s father.

According to Marc, he’s been moved by how his daughter has been so selfless with this effort and aware of what is going on outside of her own world.

“It’s impressive at a young age that she can recognize where she can help,” he said.

Greta and her family created a YouTube video asking for donations of socks, underwear, light jackets, and sweatshirts to donate. They took any cash donations and shopped to create these kits, which will be delivered through Lifting Hands.

“I think that’s pretty fantastic… The people of Utah have just stepped up to help the people of Ukraine, and it’s been amazing to see all the generosity and kindness,” said Traci Parsons with Lifting Hands International. “We’re getting a few shipments out the door, and we’ll just box up the next set of things coming in and we’ll just keep them going for as long as we can.”

Parsons said Greta donated more than 60 kits and additional items as well, worth thousands of dollars.

Utah, the least gambling-addicted state in the nation