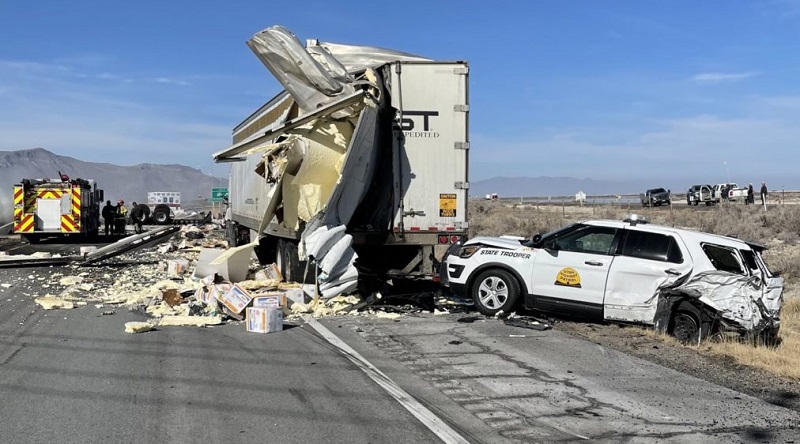 Grantsville, Utah — Following an accident involving a Utah Highway Patrol trooper near Grantsville, all westbound lanes of Interstate 80 have been shut down.

A trooper had stopped a semi-truck on the side of the highway. Another truck attempted to move out of the right lane to give the trooper more room, but failed to see a car in its blind spot and over-corrected, causing the truck to sideswipe the other semi and the trooper’s SUV.

Following the initial hit, the truck crashed off the highway and turned on its side, leading to the cab catching on fire.

The car the truck was trying to avoid also crashed, injuring the male and female passengers inside.

According to bystanders who witnessed the crash, they helped the trooper get the passengers out of the car.

According to trooper Sterling Saiz, the man and woman were in stable condition when they were transported to the hospital.

“I’m very lucky that I was standing on the passenger’s side of the semi-truck and not making a drivers side approach, and ultimately, everybody seems to be coming out of this without any fatalities in a situation that easily could have been very tragic,” said Saiz, who was not injured during the accident.

U of U Health receives support from the Department of Defense