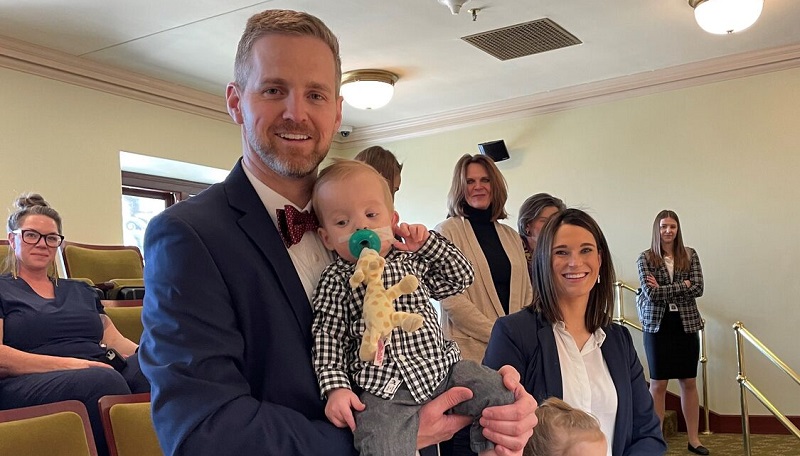 Salt Lake City, Utah — On Omphalocele Awareness Day, families with children born with omphalocele were recognized in both chambers Monday morning. The condition means the baby was born with organs outside their body rather than behind the abdominal wall.

“It touches more people than we think,” said Rep. Tim Hawkes (R-Centerville) on the House floor Monday, noting that the condition can be fixed through surgeries. “They go on and lead happy and healthy and productive lives.”

In the House gallery for the recognition were Parker and Lindsay Cluff and their three children. The youngest, Crew – who will turn one in a week – was born with omphalocele.

“It’s overwhelming,” said Parker Cluff of the diagnosis. “A lot of stress and restless days wondering if he’s going to be okay.”

According to Cluff, the team at Primary Children’s Hospital made the ordeal “very manageable and much easier” to deal with. Today, after two surgeries, the crew is living a normal life.

“It’s a little-known condition, so it’s good to have recognition,” Cluff told KUTV 2News, “so that people can really be aware that it’s happening more often than people realize.”

Leaders of the House and Senate both planned to sign a citation recognizing the issue.

“This citation really recognizes people that have to live with this birth defect,” said Hawkes, “and then also their caregivers who provide so much love and support for them.”

Dozens of accidents due to Wednesday’s lake effect