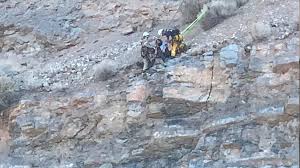 UINTAH COUNTY, Utah, May 24, 2020 — A 52-year-old Utah man was flown to a Colorado hospital Saturday after falling and becoming stuck on a cliff near Jones Hole National Fish Hatchery in Uintah County.

The five-hour rescue operation began when a group camping near the hatchery heard someone calling for help, said a news release from Uintah County Sheriff’s Office. One of the people in the group is a member of the Wasatch County Sheriff’s search and rescue team. The group worked to locate the person calling for help, but echoes off the cliff walls made it impossible to pinpoint the person’s location.

“The group called central dispatch about 1:40 p.m. to report what they were hearing,” the news release said. “The Uintah County Sheriff’s search and rescue team was mobilized and asked for help from helicopter crews with the Utah Department of Public Safety and Classic Air Medical.”

The Classic Air Medical crew arrived first, and were able to spot the injured man on the cliff, but could not reach him due to the steep terrain, the news release said. A camera-equipped drone launched by Uintah County search and rescue also pinpointed the man’s location on the cliff.

This information was passed to the DPS helicopter crew and they were able to reach the man and hoist him off the cliff, the news release said.

The man told rescuers he remembered starting the climb up a slot in the cliff earlier Saturday morning, making it about three-quarters of the way up before he fell an unknown distance. He said he struck his head during the fall and lost consciousness. He didn’t know for sure how long he had been stuck on the cliff before he regained consciousness and began calling for help.

“The area he was climbing in is out of the way,” Uintah County Sheriff’s Sgt. Dustin Cheshire said. “You wouldn’t really expect someone to be climbing there. If it hadn’t been for the camping group with a Wasatch County search and rescue member who heard this guy yelling and screaming, it’s unlikely anyone would have found him.”

In addition to a suspected head injury, the man also suffered injuries to his lower extremities that prevented him from being able to use his legs, Cheshire said.

The man was flown to St. Mary’s Medical Center in Grand Junction, Colorado. Cheshire said the two helicopter crews were instrumental in locating the man and shortening the duration of the rescue operation.

“Without the helicopters, we might still be working with ropes to get him down off the cliff,” Cheshire said.