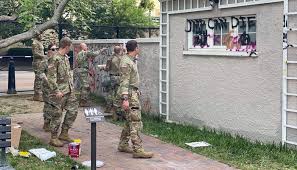 “Members of the Utah National Guard, who were activated to Washington D.C. to augment civil authorities, woke up early today to help clean the nation’s capital after a night of protests, June 3,” said a tweet.

The photo was taken Tuesday in front of the Salt Lake City Public Safety Building.