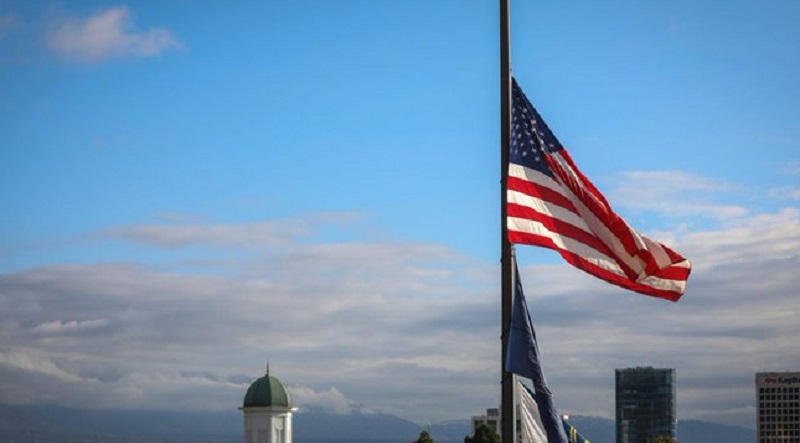 Salt Lake City, Utah – In order to reflect on the 21-year anniversary of the attack on the World Trade Center in New York City, local leaders and members of Utah’s congressional delegation have been taking to social media.

Governor Spencer Cox has ordered flags to be flown at half-staff in remembrance of the 9/11 attacks.

“Today we remember those we lost on 9/11. We recognize the first responders, rescue crews, and ordinary people who rushed to help,” Cox said on Twitter. “We honor our military members who served and sacrificed to protect our freedoms and safety.”

Cox also posted on Facebook: “In the aftermath of 9/11, thousands stepped forward to help, demonstrating that what unites us is far greater than what divides us. This year on 9/11 Day, we will continue to demonstrate unity through our service.” He then encouraged Utahns to find volunteer opportunities by visiting americorps.gov/911-day.

The first member of Utah’s congressional delegation to post a statement on Twitter was Sen. Mike Lee.

“Twenty-one years later, the attacks on September 11th remain imprinted on the American psyche,” the statement reads. “The events of that dark day changed America and the world forever. We know, however, that the American resolve is strong enough to overcome any evil and that America will face her enemies and stand for freedom, no matter the cost.”

Next came a statement from Sen. Mitt Romney, who posted a video statement reflecting on his memories of the attack, interspersed with archived news footage both from September 11th and footage from the opening ceremonies of the 2002 Winter Olympic games in Salt Lake City, where a flag that had flown above the World Trade Center was presented and raised as part of the ceremony.

“We were in our office in the Reagan building when someone down the hall yelled ‘you ought to turn on the TV… we turned on the TV and we saw the flames coming from one of the World Trade towers.'” Senator Romney says in the video. “The first thing that came to mind as I looked at those towers burning was how many people are in those towers? How thousands upon thousands of people get out of those buildings?”

Later on in the video he describes the moments where the flag from the World Trade Center was brought to be raised during the opening ceremonies of the 2002 Winter Olympic Games.

“As it was brought in, the audience that we expected to burst into cheers was instead totally silent,” says Romney. “I don’t imagine there was a dry eye there as people contemplated the words that were sung and that flag in our presence.”

Utah Congressman Burgess Owens was the next to post.

“The terrorist attacks on September 11, 2001, changed our country forever,” his statement reads. “21 years later, we commemorate this tragic anniversary and honor the nearly 3,000 lives lost, our heroic first responders, and the brave Americans who risked their lives to keep us safe.”

“Today, on 9/11 we mourn for the 2,977 who lost their lives and for the families of these victims. We recognize the selflessness of first responders who rushed in, with no thought of their own lives,” he wrote. “May we #NeverForget their sacrifices.”

Finally, as his colleagues did, Rep. Blake Moore posted his thoughts in a tweet.

“Today we remember—& recommit to never forgetting—the lives lost & tragedy that took place on US soil 21 years ago,” Moore wrote. “We are forever grateful to those who sacrifice so much to protect our nation from terror so our nation never faces such evil again.”

Utah events & things to do