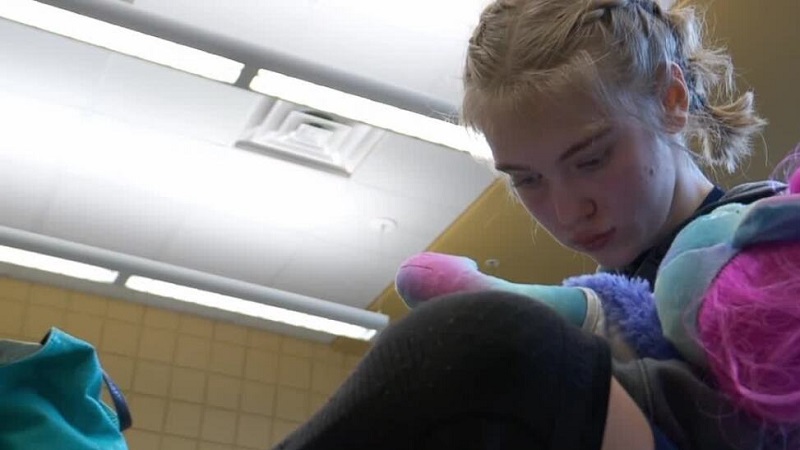 Utah – A Duchesne High School team is making history in the Beehive State. “I honestly didn’t expect to see myself here and I was excited to see the improvement,” said Alexie Weimer.

Duchesne High School has a female wrestling team for the first time. It was Coach Shane Ivie’s daughter that convinced him to pull a team together.

The team was made up of a group of four girls, including Aspen Huntington, who’s overcome even more struggles in her personal life. “We’re all different. I’m more quirky than others,” Huntington said.

Since she was born, Huntington has been wrestling with her health. Some of the challenges she’s faced include autism, epilepsy, and cerebral palsy. “The best way to describe it, it’s a very emotional rollercoaster,” said Aspen’s mom, Michelle Huntington. “You get mad, you get frustrated and especially when they’re sick and you don’t know how to help them. You feel helpless a lot so it’s very emotional.”

But even with the struggles, her daughter has faced, Michelle believes in working for what you want. “I’ve always taught [Aspen], that if you put your mind to it then you can do it, you might just have to do it differently,” Michelle explained. “She kind of threw that back at my face when she wanted to wrestle.”

“If you think about it, even though I have all of these disabilities. It doesn’t limit me mentally,” Aspen said.

According to t0 Coach Ivie, he never expected he would need to learn how to coach someone with disabilities. “If people would just give me chance, I could do it,” Aspen remarked.

Coach Ivie and the wrestling team learned about how they could help Aspen after consulting with Aspen’s medical team. “Right off the bat, she came in and had a limp to her and stuff with different conditions,” Coach Ivie said. “The first thoughts are what can I do with this girl and how can I get her to be a part of wrestling.”

Competing in wrestling matches around Utah Now, she’s making history. One team came together to buy her new shoes. “She has a lot of heart, like that girl. She is like my biggest idol like I can’t even say how much,” said Joey Kay, a wrestler for Juab High School. “She’s so down to earth. It takes a lot to be that tough and she’s not just physically tough, she’s mentally tough.”

She’s inspiring wrestlers across the state to never give up, no matter what circumstances you may be in. “She shows everybody, every day it doesn’t matter what you have,” Michelle said tearfully. “If you want to do it, you can do it and I think that’s what inspires everybody about her.”

At least one cow shot and killed in Eagle Mountain ranch

Gas prices have an outsized impact on inflation