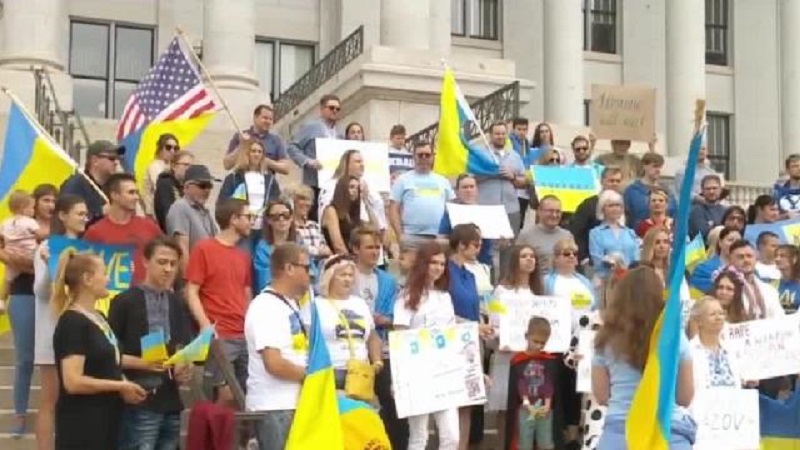 Salt Lake City, Utah — Ukrainians say they are still fighting for that freedom all over again after the Russian invasion earlier this year, as Ukraine celebrates the 31st anniversary of its independence. “We are more afraid to lose our freedom than we are afraid of the rockets. That’s how Ukraine has been for centuries and that’s how we will be,” said Vlada Yaremenko, a community organizer in Utah helping Ukraine.

She is from Ukraine but has lived in Utah for the past seven years. Soon, she will pursue a master’s degree in London doing international development and humanitarian emergencies. “The war in Ukraine inspired me to pursue this degree,” she said.

She has been working with people and communities to help raise awareness about the war since Russia invaded Ukraine in February. “It’s a full-blown war – civilians, children, anyone, any human in Ukraine is still dying,” said Yaremenko.

According to Yaremenko, the support for her home from all over has been so special. “It’s been incredible to see how many people care about Ukraine and how many people want to donate,” she added. “It’s been a really good response from the community in Utah. just really heartwarming to know Utah is with us.

But according to Yaremenko, people should know that the war is still not over. People are dying or being imprisoned for defending their country. “The prisoners of war are still in prison right now and we just want to do our best to free them because we are afraid for their lives and they fought till the last minute.”

“It’s a bittersweet day,” said Artem Shum, who is also an organizer like Yaremenko. “We are so happy to be independent, but we are so sad to be under shelling and bombs today. At the same time, I’m so proud of how we fight and how we get together as a real country is supposed to do.”

Yaremenko adds that the challenges of war have brought out the fighting spirit of her country. “Forming our identity and I think the war has shown how strong our nation is and it’s definitely shown us who we are and how we can battle this evil, with the help of the rest of the world.”

Teacher accused of sexual exploitation of a minor