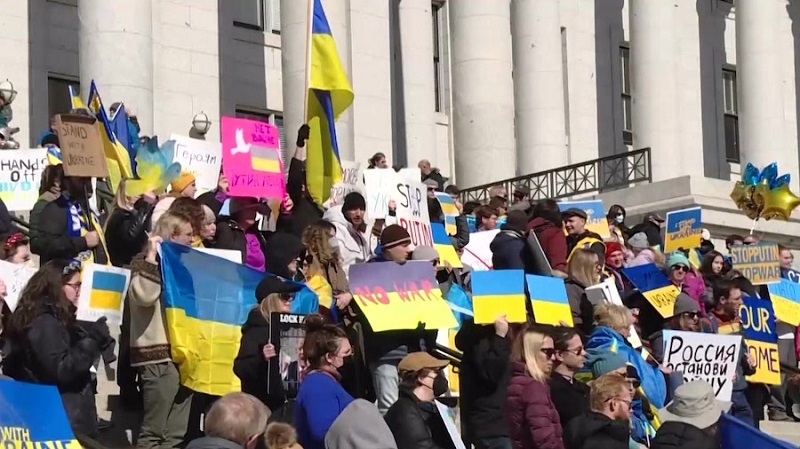 Kavetska, who has lived in Salt Lake County for 13 years, pleaded for the safety of her family in Ukraine.

“Pretty much my whole family is back home. My father, my grandparents, and great-grandma, my cousins and uncles — everyone who I love is there,” she said.

According to Kavetska, her family is now under curfew to try and protect their city.

“They are turning off the lights at 8 p.m. to not give any chances of our opposite hurting us,” Kavetska said.

According to a group, originally from Moscow, during Saturday’s gathering “The last thing we could do today was just sit home and do nothing. We realize by standing here, we may not change everything, but we want to show our support — the solidarity that we stand for Ukraine, for what is right, and what is just.”

Nadia Pavlova-Caldwell came to the rally with her husband and 4-year-old son. She is a Russian-American.

“Russians want to be free from this President; no one is happy with Putin,” she said. “If millions will go out to the street and tell, yell and scream… Of course, they can send you to the jail, but not the millions. Not enough space,” she said.

Those attending the rally spoke of the apparent Russian Disinformation Campaign.

Ukrainian-Americans had a plea for American government officials.

“Our main concern is: close and protect the sky. After that, the Ukrainian army will defend themselves,” Kavetska said. “Being so far away from family, this rally is how we can help to reunite together. We can reunite for freedom, for peace in the whole world.”