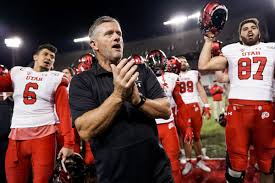 SALT LAKE CITY  – The Utah football team, which has won two straight Pac-12 South championships, was picked to finish third in the division in the 2020 media poll.

The Utes kick off the season one month from today, and head coach Kyle Whittingham’s biggest task over the next 31 days may be to pick his starting quarterback. Cam Rising, Jake Bentley and Drew Lisk will all compete for the job.

“The main focal point is going to be getting that quarterback situation solidified,” Whittingham said. “We’ve got to be getting it down to two within a week or so into camp. We can’t give three guys reps for very long. So we’ll go from three to two fairly quickly. Then, hopefully two weeks out or more, we’ll have the starter named.”

On defense, Utah has to replace nine starters including the entire secondary, with Julian Blackmon, Jaylon Johnson, Terrell Burgess and Javelin Guidry all in the NFL now.

“We’ve got a complete rebuild going on in the secondary,” Whittingham said. “We lost all five starters. So, those two spots, the quarterback spot and the secondary spot are definitely our primary focus.

The Utes also need to find a replacement for all-time leading rusher Zack Moss, but wide receiver is a strength on the team, where Samson Nacua, Jaylen Dixon, Bryan Thompson, Solomon Enis and Britain Covey are all back.

“We’ve got a lot of veteran guys returning,” Whittingham said. My expectation of that group is they have to be leaders for us. We lose the number one running back in Utah football history in Zack Moss, and we leaned heavily on him the last few years. This year, one of the strengths of the team in the wide receiving corps. They’ve got to step up, and its their time to shine.”

One thing that won’t be ready is Rice-Eccles Stadium, where the south end will be under construction all season long.

“It’s going to be makeshift,” Whittingham said. “We’ve got three home games minimum. We’re still exploring locker rooms and where we’re going to go for halftime and all the stuff. The locker rooms are completely gone. The home and visitor locker rooms were in that south end zone, so we’ve got to have an answer for it.”

Utah will kick off the 2020 season November 7th at home against Arizona.