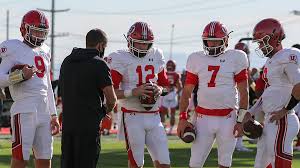 SALT LAKE CITY – The most important challenge during Utes training camp is to find a new starting quarterback.

South Carolina transfer Jake Bentley, Texas transfer Cam Rising and senior Drew List are all battling it out on the field.

“It’s all boiling down to execution,” said head coach Kyle Whittingham. “We’re off to a good start with that, all three of them had some good moments on Friday and Saturday, so it’s going to be a tough decision, I can tell you that.”

Bentley and Lisk are more drop-back style quarterbacks, while Rising is more of a dual-threat quarterback. But they all want to compete.

“We’re going to show up everyday, regardless of when the decision is made, or what decision are made,” said Lisa. “All three of us are confident, and I don’t think our confidence will waiver.”

“I wouldn’t call it pressure,” said Bentley, who played three seasons for the Gamecocks. “You come in every day prepared and ready to compete, and that’s what we’ve done our whole lives. Just going out there trying to make each other better, trying to make the team better and just finding a way to do that each and every day.”

Rising might have a slight edge right now, having sat in the press box with offensive coordinator Andy Ludwig last season. Rising also ran the scout team against the Utes starting defense each week.

“I’d say those reps I got against the number one defense with the scout team were valuable,” Rising said. “They have been serving me well up to this point, and I’m trying to make sure those reps are taken advantage of.”

“It’s a totally different offense for me,” said Bentley. “Obviously a lot of people run the same concept, but as Cam said this offense is complex so it takes a lot of learning, a lot of film work.”

Whittingham hopes to narrow the competition down to two by the end of the week, and to name a starter within the next two weeks.

But no matter who wins the starting job, the other two will stay ready in case their number is called.

“You can’t slack regardless of what the outcome is,” Lisk said. “If you show up one day and you’re not prepared, you can get thrown into the fire at any moment. Regardless of what happens, I fully expect every single one of us to show up with the mindset everyday of trying to prove yourself.

“You’ve got to come in competing everyday,” Bentley said. “Even when and if you’re named the starter, you’re competing with yourself everyday to be better. That’s what we all plan to do, what I plan to do and looking forward to it.”